Truth and beauty accompanied every devastating turn in the journey that was Breaking Bad. Perhaps even wisdom. As a religious devotee of Vince Gilligan's masterful narrative, I will be processing its conclusion this past week for some time.
What follows is one rabbi's commentary on a television show that was at once artful expression and transformative experience, pop culture and philisophy. We could do much worse than learn lessons of intention, truth and power by treading lightly through the dark wisdom of Breaking Bad.
[Spoiler alert!!]
Breaking Bad was an excrutiating show to watch. It was hard to breathe. But the pain of having its narrative flow interrupted by commercials was even worse. Thanks to Netflix and iTunes, I binge-watched my way through the entire series this past summer, and watched only the finale this pat Sunday "live." My attunedness to the characters' emotions, to the rich cinematography, to the terrible ripples of every action and word, was disrupted by distraction. The Talmud instructs that "one who connects liberation to prayer brings redemption," a rhetorical way of making sure certain things are experienced in sequence and without interruption, so that engaged participants see that one intense moment needs and feeds off another, that distractedness gets in the way of flow. The very way in which we experience culture is a fascinating indicator of our ability to pay attention, to feel connected with just one thing. Jewish tradition calls this flow "kavannah," or intention. It's hard to achieve, but once you have experienced it, anything less feels like, ...well, less.
Walter White, the un-hero of the Breaking Bad saga, is a rationalist so skilled that, until the very last moments of the six-year journey, he even convinces himself that his evil actions are morally justifiable as each terrible one is taken, painstakingly mythologized as necessary for his family's welfare. White is compelled over and over to lie, cheat, murder, and hurt. But, as Rabbi Abraham Joshua Heschel wrote, "an act is not good because we feel obligated to do it; it is rather that we feel obliged to do it because it is good." Only at the very end does White acknowledge was was painfully true to every other character (and every viewer), which the writers had him say so simply: "I did it for me. I liked it. I was good at it. And I was really -- I was alive." This acknowledgement, and White's traumatized wife's (and our own) silent shock at its sudden blinding honesty, is one of the few lingering hints of redemption in a narrative arc that crossed countless moral lines. It is only through verbally naming our sins in the presence those we have wronged, Jewish tradition teaches, that we might reach forgiveness.
In Joan Didion's shocking The Year of Magical Thinking she explains her need to be alone after the sudden death of her husband: "I myself was in no way prepared to accept this news as final: there was a level on which I believed that what had happened remained reversible. That is why I needed to be alone." This magical thinking leads to what playright Henrik Ibsen called "vital lies," defined by Daniel Goleman as "soothing mistruths people let themselves believe rather than face the more distrurbing realites beneath." In this light, perhaps the most devastating moment of Breaking Bad occurs when White, exiled, dying from his cancer, reaches out in desperation to his son, grasping at one last chance to fulfill his delusional intention to support his family with ill-gotten financial gain. His son, finally exposed to the brutal consequences of his father's choices, just as brutally removes the illusion of righteousness from his father's eyes, breaking a myth of goodness masterfully woven and endured for far too long. The blood on White's money is born from sin, a contamination irreversible even by the most skillfully woven lies. If White had only remained alone in exile, he could have gone on believing the lies. But we aren't made for such aloneness. He never wanted to be alone, and so he is forced to reconcile his internal illusory self with the Walter White others know. It's a terrible confrontation, but it's also not good, we are told by the Torah, for a person to be alone.
Power has been dedfined by historian Jon Meacham as "the ability to bend the world to one's will, the remaking of reality in one's own image." This is true goal of Walter White's work. He isn't in the money business, or the drug business, but in "the empire business." A Jewish legend of another empire-builder comes to mind:

After Hadrian, emporer of Rome, conquered the world, he desired to be declared God. Troubled after failing to become God, his wife told him, 'You can become God, for you are a great and mighty king, and everything is in your power. I suggest one thing: return God's deposit and you will become God.' Hadrian asked, 'What deposit?' His wifeanswered, 'Your soul.' When Hadrian replied that he was unable, his wife quoted the verse 'no person has authority over the day of death (Ecc. 8:8)' and told him 'in truth, you are a man, not God.'

In an early episode of Breaking Bad, Walter White chooses the street name 'Heisenberg,' adopting his new namesake's principle of uncertainty. Is he good or bad, teacher or a criminal, avenging savior or angel of death? From the very beginning of the story, White has been dying and living, lying and, in his own way, tender and loving. Whereas White isn't certain his dark choices will have been for nothing, we viewers are quite sure: his brilliant creators have given us much to ponder.
at September 30, 2013

announcing the publication of "A Manifesto for the Future: The ShefaNetwork Archive Conservative/Masorti Judaism Dreaming from Within"

announcing the publication of

A Manifesto for the Future: The ShefaNetwork Archive
Conservative/Masorti Judaism Dreaming from Within
Edited by Rabbi Menachem Creditor

Available for purchase at http://www.amazon.com/Manifesto-Future-ShefaNetwork-Conservative-Dreaming/dp/149279712X/

(See Table of Contents Below) 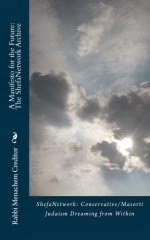 This collection has been nine years in the making and is an archive of overflowing Jewish passion. There future of Conservative/Masorti Judaism depends on voices like those shared in this book, which was created to fulfill the mission of ShefaNetwork: to bring together dreamers from within the Conservative/Masorti Movement and to give their dreams an audible voice. ShefaNetwork was born in December of 2004 to create a virtual community of professional and lay activists in the Conservative/Masorti movement and a place to discuss the movement's direction and ways of strengthening Conservative Judaism for the future. Perhaps one of the greatest strengths of the Shefa enterprise is the way it has avoided strict boundaries between the intellectual and the practical. Shefa has provided a very fruitful engagement between intellectuals and practitioners, many of whom should be described as falling in both categories. This is as it should be, because a religious movement needs both a coherent vision with philosophical rigor and historical perspective, and the practical wisdom to enact this vision. Usually, these two tasks are not done well by the same people, but that too is a bias that leads us to divide the world into "theorists" and "practitioners," as if the two are from different planets. If the Conservative movement is going to succeed in creating spiritual communities in its schools, synagogues and camps, it will have to bring together the theological visions of the movement's intellectual lights with the practical wisdom of professionals and lay people. The most important accomplishment of ShefaNetwork may be that it has begun a conversation that includes all of these essential voices.

71    A Manifesto for the Future: Drop ‘Conservative’ Label to Tap True Meaning and Reach the Faithful, Rabbi David Wolpe

100  The Struggle for Self-Definition in Conservative Judaism, Rabbi Robert Gordis

From ShefaJournal 5768.1: Instrumental Music on Shabbat and Chag

179  The Invitation from Rabbi Barry Leff

251  A Closing Reflection on the Conversation with Rabbi Leff, Rabbi Menachem Creditor

315  Toward a new vision for the United Synagogue of Conservative Judaism, Rabbi Neil A. Tow

321  To What do We Aspire? Dr. Jonathan Woocher

329  What is Success? Fred Passman

331 The Chance to Build a Jewish Organization
from the Ground Up, Rabbi Neal Joseph Loevinger

From ShefaNetwork Journal 5770.1: The Relationship Between Conservative Judaism and the Conservative Movement

Part I: The Shmirat HaGuf Discussion

From ShefaJournal 5771.1: HaYom uMachar: Visions of the Conservative/ Masorti Movement in North America

401 Public Letter to the ShefaNetwork and members of the Hayom Coalition, Nina S. Kretzmer

413  Visioning Future Success: The Next Iteration of a Central Organization for Conservative Judaism and Kehillot, Rabbi Loren Sykes

462  Towards a New Model of Leadership for College Kehillot, and the Entire Movement, Sandy Johnston

SheminiAtzeret: The world is a Sukkah in which no moment is to be lived in vain. Every person is another's gateway to heaven. So stay open.

Please join me at the Berkeley Ceasefire Walk Against Violence! 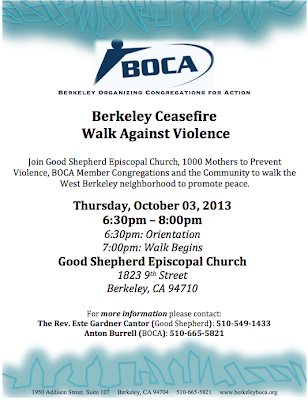 Feeling the power of #Sukkot through friends, abundance, family, and sweet air. May every living soul receive these sacred gifts. #joy #life

Just gotta say: 3 days #unplugged does a soul good. May this week get better for everyone everywhere. #shavuahtov

For those in the Washington, District of Columbia area, please attend this important rally tomorrow if you can! #gunviolence #gunsense #gunsafety

For those in the Washington, District of Columbia area, please attend this important rally tomorrow if you can!#gunviolence #gunsense #gunsafety 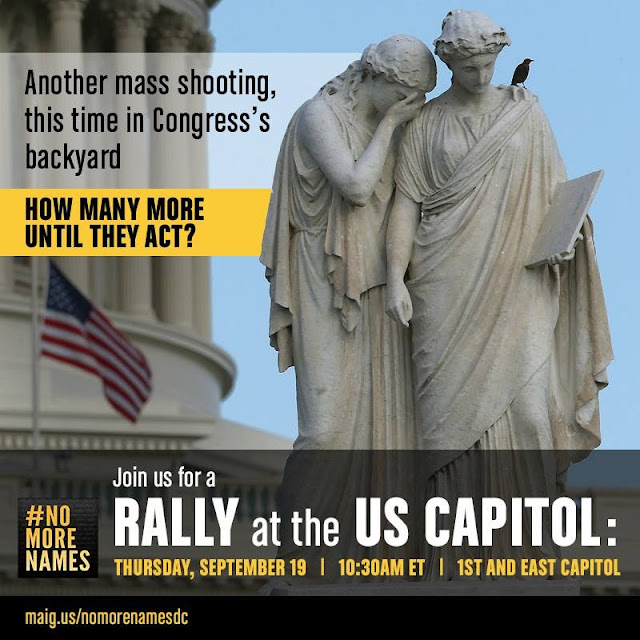 It's time to educate ourselves, as citizens, on the history of the #Filibuster. https://youtu.be/3y1QA6OeAcQ 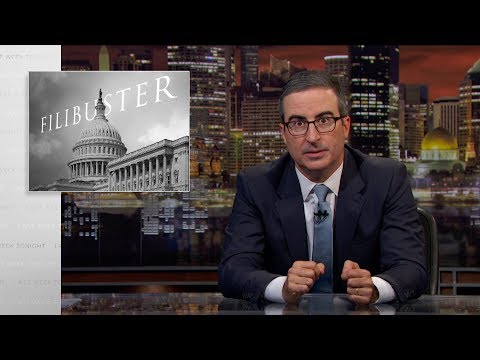