Parashat VaYikra contains echoes of the past few weeks. We just finished the book of Shemot/Exodus, and this week we begin the book of VaYikra/Leviticus. The end of Shemot is all about the building of the mishkan, and so, true to Jewish tradition, the journey forward remembers the past. The final verses of Shemot read:


So strange that Moses, after dedicating years to connecting the Israelites to God, can't enter into the very structure he has helped create for that same purpose. And why? Because there isn't room. God's presence is so filling - so "Present" - that there just isn't room for anyone. Even Moses. What must it have felt like to be Moses - closed out of the very place he could have received the ultimate validation, the deepest comfort?

Consider the Jewish mystical notion of "Tzimtzum," contraction. Jewish mysticism teaches that, in order to create the world, God needed to not be everywhere and everything. After all, how could anything independent exist if God were everywhere and everything? And so God pulled back some of God's Self in order to provide physical space and spiritual independence. Tzimtzum helps address questions regarding free will, suffering, and existence.

The same model holds true for human relationships. I think of my precious children. If I wasn't ready to do Tzimtzum, to contract myself enough to give them the room to make their own decisions - decisions that I might not make nor approve of - I shouldn't have had a child. If we aren't ready to do Tzimtzum and thereby provide "space" for our partners to act and think independently from us we aren't prepared to be a couple. All healthy relationships include Tzimtzum and are infused with the obligation to grant others the right to inhabit their own place. 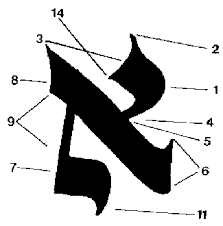 What do we see in the end of Exodus? There isn't room for Moses because God is SO present, because God does not do Tzimtzum, does not provide space for Moses. This week's Parashat can be read as a response to last week's: Look at the very first verse of VaYikra: "God VaYikra/Called to Moses and Laymor/spoke to him from the Tent of Meeting... (from Lev. 1:1)" There is a peculiarity to the way scribes write the word "VaYikra/Called"- the letter Aleph is smaller than the other letters. We'll return to the "small aleph" in a little bit. For now, look at a different aspect of this verse. The word "VaYikra" seems to mean the same thing as the word "Laymor." Look what Rashi comments on this verse:

"For every thing and for every utterance and for every command a "calling" came first. It is a language of embrace, the language that the helping angels use, as it says, "And one would call ("kara," the same word as "called" in our verse) to the other (Is. 6:3)." But for the prophets of the nations who worshipped the stars and told horoscopes it was revealed to them in the language of impermanence and impurity, as it says "And God manifested (VaYikar) God's Self to Balaam (Num. 23:4)."


Rashi explains that the term "VaYikra/Called" actually is God's embracing invitation to Moses, perhaps in contrast to the excluding Presence of God at the end of Exodus. In this light, VaYikra's very opening is Tzimtzum, of a Divine contraction which grants room to another. But look closely at what Rashi is saying. Angelic calling (kara) is a divine embrace, but inauthentic prophecy (VaYikar) is impure. The Hebrew, again, is the center of Rashi's comment. Notice how similar the word "VaYikar/Manifested" is to "VaYikra/Called."

What is the difference between VaYikra and VaYikar? The letter Aleph- the small aleph.

The difference between being included (Moses) and being excluded (Balaam) is a little Aleph. Whereas in Shemot there wasn't room for Moses, the "small aleph" of VaYikra re-invites Moses in to sacred intimacy. In fact, one of the explanations of the small Aleph is that, originally, the Torah was written without spaces between the words. The aleph became lost between the words. Our small aleph is the result of scribal tzimtzum- the scribes found room to allow a letter to exist.

And so we see that Tzimtzum is the difference between "in" and "out."

Tzimtzum is the heart of a mindful, relational practice. When I recognize the power of someone close to self-determine, my life changes. I become freer. A quest for God requires honest and open self-reflection and the recognition that God's image is just as surely in the face of another as it is in mine is key. Did I give up some control over my life by becoming a father, a life-partner? Absolutely. Am I willing to continue working on my own Tzimtzum? With all my heart.

I pray that the same intentionality with which we invite a place for God's Presence we also open our arms and synagogues and friendship circles to all who wish to join in sacred relationship. I pray that God's act of Sacred Tzimstum be reflected in the ways we decide who is "in" and who is "out."

Are we prepared to sacrifice of some of our control?
at March 21, 2012