Sing! Psalms of Praise, of Purpose, of Love (An Introduction to the Book...

Sing! Psalms of Praise, of Purpose, of Love

“When I was on the boat coming over from the Old Country, I remember one picture very clearly: When we all saw the Statue of Liberty come into view, many of those on the decks of the boat threw their tefillin (prayer phylacteries) overboard. I want you to become a scuba diver so that you can rescue those pairs of tefillin.“

As it turns out, this story has made the rounds of oral traditions from early Jewish American immigrants to Shoah survivors. It is immortalized within the poetry of early 20th century American Yiddish Poet Jacob Glatstein, and later in the modern novel In the Image, by Dara Horn. They story’s historicity is simply overwhelmed by its meanings. What could those who threw their tefillin overboard have been thinking? They had suffered and survived the constriction of their religious freedoms, only to abandon the symbols of their tradition into the waters of America! [to continue reading, click here!]
at January 08, 2018 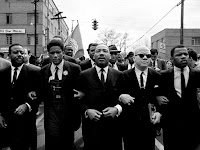 Intro: For each day leading up to Martin Luther King Junior Day, I’ll choose one text by the American Prophet Rev. Dr. Martin Luther King Jr, and offer a rabbinic comment. These sacred texts are more than historic statements of a champion of Human Rights: they are a roadmap to a better society, what King called a ‘Beloved Community.’

May we be strengthened by his enduring spirit to bring our communities one step closer to his vision.
________________

“Then Moses stretched out his hand over the sea; and God swept the sea back by a strong east wind all night and turned the sea into dry land, so the waters were divided. The children of Israel went through the midst of the sea on the dry land, and the waters were like a wall to them on their right hand and on their left.” (Ex. 14:21-22)


Splitting of the Sea of Reeds, the climax of the biblical Exodus, is typically depicted in cinema as an explosion of waters after a dramatic gesture by Moses. Truer to the text, truer to human experience, liberation is a grinding process of marching tired feet.

A classic Jewish teaching, chanted during moments in which justice and redemption feel dreadfully far in the future, affirms faith in the coming of the Messiah. “Though he may tarry, I will wait.” In contrast to this, modern religious movements, discontent abrogating joy to the World to Come and committed to changing the World That Is, require language like that of Dr. King’s.

Examples of nagging injustice abound. Will you wait for that better day to arrive? Or instead, might you find the moral courage to fan the strong eastern winds of freedom with your own tired hands, crumbling every alienating wall with a determined impatient love?