Davening in a Grove (#poem)

davening in a grove
trees and souls reaching
up and in
for light, for love

all of being
One now many
remembering our shared origins

A Comment on President Obama's Executive Actions on Immigration

I've held back from publicly voicing my assessment of the President, but (from my distant perspective) his executive performance has seemed so inconsistent. I have never wavered in my respect for the office, nor my personal admiration for his obvious noble spirit. Tonight, by publicly airing that nobility on behalf of immigrants (among whom, in recent American history, all of my ancestors would have been counted); by acknowledging the broken-ness of our political parties; by taking responsible executive action (and by testing those encoded limits for all the right reasons) - for all of these reasons, he re-became the President I voted for.

(To those for whom every issue is one issue, I'll add: I remain concerned about our administration's apparent readiness to negotiate with Iran. Nuclear capacity is an obvious existential threat to Israel. I take the Israeli government at their word that we will act if necessary and the American government's public declarations that Israel is inherently empowered to act in its own interests for the security of its citizens. The necessity of adding this demonstrates the complicated dance of progressive American citizens who are Zionists. But, since I've wandered into this topic, I'll meander back by pointing out that international terrorism - very real in Israeli and in America, and too long conflated with illegal immigration to the United States - is not always part of a society's internal process. In other words: A progressive Israel and a progressive American likely agree that terrorism is a bad thing and that treating hopeful citizens with dignity is a good thing.)

I am thrilled to share with you the final copy of the interfaith clergy letter in support of the Voting Rights Amendment Act, which was coordinated by Bend the Arc: A Jewish Partnership for Justice signed by more than 1,000 faith leaders from all 50 states and DC and more than two dozen religious denominations.

I ask you to please consider sharing this email (and the social media links below) with your networks. This morning, we shared the letter with every Congressional office and, to amplify the faith leaders’ voices, Bend the Arc has placed a full page ad about the letter today in Roll Call which you can view here. Roll Call also picked up an op-ed I was humbled to co-create with Bend the Arc CEO Stosh Cotler, which you can read here: “After a Rainstorm of Voter Disenfranchisement in 2014, Congress Must Restore the Voting Rights Act”

The letter is attached and is also available alongside the ad and op-ed here: www.bendthearc.us/clergyforthevote

We hope you will share the letter, ad and/or op-ed far and wide—to that end, here are some sample tweets:
1000+ faith leaders from 2 dozen religious denominations,all 50 states & DC write Congress in support of a #VRA4Today http://goo.gl/bdHnem

“After a Rainstorm of Voter Disenfranchisement in 2014, Congress Must Restore the Voting Rights Act” #VRA4Today http://goo.gl/bdHnem

Thanks again, friends. This has been a dark week - let's bring some light into the world.

hoping in between sobs [#poem]

crying singing.
hands on the eastern wall of my shul,
touching every shul,
images of bloody tallitot haunt me
as I teach hatikvah to
a new generation of
irrational hopeful Jews
(just don't let them see me cry)
begging the cosmos for peace,
knowing it's irrational
demanding it anyway
(in between sobs, of course)

Sunday Morning at 10am: “What's Really Happening On (and Under) the Ground in Jerusalem?”

“What's Really Happening
On (and Under) the Ground in Jerusalem?”

CNS Scholar-InResidence Jared Goldfarb will deliver his final talk at Netivot Shalom, entitled “What's Really Happening On (and Under) the Ground in Jerusalem?” Explore the politics of archaeology with one of Jerusalem's most experienced and sought-after guides. Discuss what is involved in exploring the many-layered past of the holy city.
netivotshalom.org 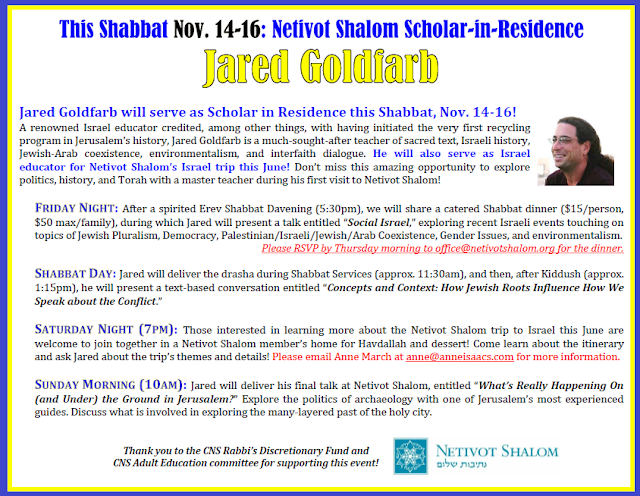 power quietly coursing
through this quiet minyan
suddenly I am aware

nowhere else calls
for in this fleeting moment
everywhere, everything, everyone
is right here