From JTS Chancellor Eisen: Jews and Others, Continued

Over the past several decades, there has been a sea change in Jewish engagement—a reimagining of what it means to be a Jew and a citizen of our planet. Whether youth leaders or active adults, Jewish voices have joined a chorus of empowered people around the world saying "no" to injustice. As hunger relief and famine now make the front page every day, it is our responsibility as Jews to do something.  Join AJWS President Ruth Messinger for a dynamic presentation about AJWS's role in famine relief, food justice and the upcoming national Global Hunger Shabbat. Learn more about how you can be a part of it all.

Ruth W. Messinger
As president of American Jewish World Service (also known as "AJWS") since 1998, Ruth Messinger has built a strong international development and human rights organization that funds over 450 grassroots projects in 32 countries, and sends more than 400 skilled volunteers and young people to do hands-on service in the developing world each year.  Ruth assumed this role in 1998 following a 20-year career in public service in New York City and continues her lifelong pursuit of social justice issues at AJWS. Ruth is considered a national leader in the movement to end the genocide and promote peace in Sudan. She is also a leader of faith-based efforts to secure human rights and, in recent years, served on the Obama administration's Task Force on Global Poverty and Development. Ruth has been honored for her inspirational efforts to deepen our people's commitment to tikkun olam by many national Jewish organizations and has received honorary degrees from four major rabbinical seminaries. In recognition of her work, Ruth has been named one of the Forward's "50 most influential Jews of the year" for nine years and was recently included by the Jerusalem Post in it's list of the "World's Most Influential Jews of 2011." Ruth's husband, Andrew Lachman, directs an education foundation in Connecticut. Ruth has three children, eight grandchildren, and two great-grandchildren.

The taste of the grape juice still on my lips,
Heart pounding, tears drying,
I remember that day.

My little boy,
So small,
So fragile.

Before everyone sang I was doubting myself, but their faces, their voices, their souls drew mine into a dance that, every once in a while, begins again.  Like today's tearful, soulful dance.

When I brought my son into the covenant,
I was awash with the cosmos.
Like today.

When we touch,
through experience,
the grandeur of God,
we swim and dance and cry and sing.

We can be comforted in this way by God.
Today.
Right now.

This email was sent from my phone.  Please forgive any typos.

TRY/USYHigh this year or next

Who Speaks for Israeli Arabs?

Historians writing about Israel's 1948 fight for independence generally place heavy responsibility for the Palestinian Arab refugee problem on the Arab leaders who urged their people to flee Palestine temporarily until the Zionists were driven into the sea. But not all historians: in the late 1980's, a revisionist school of scholars, benefiting from fresh access to Israeli archival material and politicized by their opposition to Israeli settlement policies, advanced the thesis that blame for the refugees' flight was shared heavily by the country's founders.  In their self-criticism and often ostentatious soul-searching, these "New Historians" exemplified what seems to be an immutable characteristic of the Jewish psyche.

Charging Israel With Original Sin Shabtai Teveth,  Commentary.  What is one to make of the farrago of distortions, omissions, tendentious readings, and outright falsifications offered by the "new" revisionist historians? (1989)  SAVE

Revising History  Ricki Hollander,  CAMERA.  The inspiration and driving force behind the academic boycott of Israeli institutions is Ilan Pappé, for whom "the struggle is about ideology, not about facts."  SAVE

For Ilan Pappé, a prominent New Historian, soul-searching is beside the point. Best known for his inflammatory The Ethnic Cleansing of Palestine (2006), Pappé, Haifa-born, self-exiled to Britain, invests his energies in promoting the Arab cause in general and the academic boycott of his former university in particular.  Now he is out with a new book, The Forgotten Palestinians: A History of the Palestinians in Israel. It elaborates on his view that the Jewish state was born in sin and that this moral deformity is ineradicable.

Pappé's premise is that the Jews had no moral right to assert their case for national self-determination in Palestine because there were Arabs living there.  For the same reason, the Arabs were justified in rejecting every compromise offered, including the UN's 1947 partition plan, because the Jews were "newcomers."  In Pappé's history, the Jews "expelled" over 700,000 refugees and inexplicably—never mind the continuing state of war between Israel and the Arab world—refused to let them return.

Pappé's latest polemic focuses on those Arabs who heeded the urging of Jewish leaders and didnot flee. He finds it galling "that those who stayed became the 'Arab minority of Israel.'"  (He calls them "Palestinian citizens of Israel," since he abhors the term "Israeli Arabs.")  True, these Arabs were given Israeli citizenship and the right to vote.  But he cannot fathom why they were not treated exactly like Jews—why their ID cards listed them as "members of the minority community," and why those in rural and border areas lived under military rule until 1966.

There are dark episodes in the history of the Israeli Arabs, such as the calamity of "Kfar Kassem."  On the eve of the 1956 Sinai war, amid heightened fear of Arab fedayeen activity, an awful miscommunication over wartime curfew orders led to the killing of 47 innocent Arabs by Israeli soldiers. A number of those responsible were punished. Pappé relishes the recounting of this and other isolated disasters.

But there are many more cases that Pappé can place under the thematic umbrella of Palestinian victimization only by ignoring salient facts.  His account of the 1976 Land Day rioting, which left six Israeli Arabs dead, omits noting that the 6,000 dunams of supposedly "Arab land" involved, which were expropriated for a development intended to benefit both Jews and Arabs, were considerably less than concomitantly expropriated Jewish and state lands.  As for the frightening Arab riots of October 2000, unleashed in solidarity with the second intifada, Pappé describes them as a mere "gathering of youths" who were then cold-bloodedly picked off by "police snipers." Pappé is incensed that the Hebrew press did not provide capsule obituaries for the Israeli Arab rioters as it did for their Jewish victims.

The insistence on a narrative of oppression poses difficulties for Pappé.  On the one hand, he insists that the Jews had no reason to view the Arabs among them as a security risk, because "Palestinians by and large accepted Israel as a fait accompli."  Yet he does not want to portray Israeli Arabs as comfortable; thus, while some critics outside Israel have accused them of being too docile, Pappé defends the community's honor.  He reports that some Israeli Arabs have contemplated an "Algerian-like struggle," citing, without hint of disapproval, the "famous case" of the 1969 bombing of a Hebrew University cafeteria by Arabs from the Galilee.

Even in Pappé's Israel, life is not entirely hellish for Arabs.  He is buoyed (as if this were something new) by the "growing spaces of leisure and pastime"—restaurants, coffee houses, and parks—that Arabs and Jews enjoy together.  He does not—cannot—deny that Israeli Arabs have achieved success in a wide range of fields.  He himself points out that, despite "latent apartheid," 25 percent of Israel's medical students are Israeli Arabs. But the underlying accusation inevitably, consistently, emerges.  (Yes, almost 10 percent of the Israeli Knesset is made up of Arabs—but none of them sits on the intelligence subcommittee!)

Pappé's implacable hostility distinguishes him even in the pantheon of Blame-Israel-First revisionists. His friend and mentor, Avi Shlaim, author of Collusion Across the Jordan: King Abdullah and the Zionist Movement (1988), has claimed that Jordan never actually planned to push Israel into the sea and that David Ben-Gurion declined opportunities to make peace with its monarch before the latter's 1951 assassination.  Shlaim thinks Israel's right wing hijacked Zionism on behalf of the "illegal occupation." Yet at least he has described Zionism as the national liberation movement of the Jewish people, and he opposes anti-Israel academic boycotts.

Similarly, the late Simha Flapan, in The Birth of Israel: Myths and Realities (1987), charged that the Zionists were somehow responsible for Palestinian flight because, deep down, they did not really want the Palestinians to stay. Yet even Flapan maintains that he never questioned "the moral justification and historical necessity of Zionism."

Indeed, one of Pappé's fellow revisionists has actually reevaluated his position, even if he can't quite bring himself to recant explicitly.  Benny Morris, in The Birth of the Palestinian Refugee Problem, 1947–1949 (1989), held both Israel and the Arabs culpable for the refugees' flight.  He called Zionism a "colonizing and expansionist ideology . . . intent on politically, and even physically, dispossessing and supplanting the Arabs."  Morris now says that this description referred to the Zionism of the 1930's, before its leaders embraced multiple plans for partitioning Palestine.  His recent work, One State, Two States, places decisive responsibility for the continuing conflict on the Arab nations, a stance that has earned him excommunication by the remaining revisionists.

Pappé's loathing of Israel allows for no such complications. Pity the student assigned his latest book, and shame on any professor for assigning it. 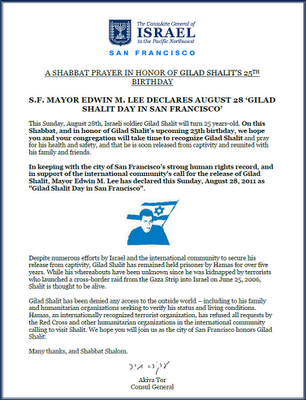 This Sunday has been named "Gilad Shalit Day" in the city of San Francisco by Mayor Edwin M. Lee. It is Gilad's 25th Birthday. It has been over 5 years since his family has seen him. For more information, click here: http://www.meetgilad.com.

Celebrate Rosh Chodesh Elul with Netivot Shalom this Wednesday, August 31st at 7:15am!

Celebrate Rosh Chodesh Elul with Netivot Shalom this Wednesday, August 31st at 7:15am!  This is our first opportunity to hear the shofar being blown for this Season of Repentance.  The shofar is blown following Shacharit each weekday until the day before Rosh Hashanah.
at August 25, 2011

If you're having trouble viewing this email, you may see it online.

Justice, Justice You Shall Pursue: with Ruth Messinger in the Bay Area!

Having trouble viewing this message? Click here to see it in your browser.