The Moment that is Calling

The Moment that is Calling
© Rabbi Menachem Creditor

A moment is calling. It isn't neat, and it isn't agreed upon. It also isn't a reason for war. It is a moment of deep realness, where we set down our phones and gather the courage to look each other in the eyes. A moment is calling.

The innovation of a person finding their inner truth as a guiding light is no innovation at all. There has always been a dynamic tension, in America and in faiths of all kinds, between collective meaning and the place of the individual. Between scheduled rites and spontaneous spirit. There has always been personal striving, the seeking of "my destiny." There has always been the communal will to survive. We need more today than the delusion that these impulses are unique or new, more than the lie that we have evolved and are better than our ancestors. There is ample evidence that we are the same, that every technological advance is as prone to weaponization as it is to healing, and that every progressive social step is infinitely fragile. There is a moment calling.

Friends, it all comes down to, and could be as soaring as, looking each other in the eyes and knowing that our common destiny is as earthy and angelic as humanity has ever been. This commitment, this way of seeing, is not new, either. It is the language of holy living, of a Beloved community, of a shining city, of Heaven on Earth. No person and no nation and no People deserves it more.

19 years after Columbine, i believe - a #poem 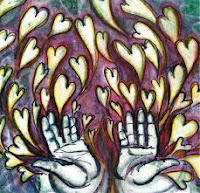 today, 19 years after Columbine
today, hundreds of thousands of our children are moaning
their tears, their eyes, their souls, their voices

I was fortunate to spend Shabbat on March 23-24 with Jewish teens from across the country as we marched on the U.S. Capitol to challenge the lack of sufficient gun control. More than a half million came to protest the fact students today must participate in active shooter drills, that someone who is still a teenager can buy a gun, that someone who just wants to attend a concert or a movie can be gunned down in an instant.

Since the March for Our Lives took place on Shabbat, I wasn’t sure if I could participate. Then USY announced the Shabbat for Our Lives Shabbaton would be hosted at Adas Israel Congregation in D.C. The Shabbaton was open to any Jewish teen, and kids came from as close as Rockville and as far as Sacramento, Calif. I met Jewish kids from Connecticut, New York, New Jersey and even Parkland, Fla. -- some 200 in all, united by a common cause.

Before Shabbat, we split into groups for ice-breaker activities, then rejoined for a beautiful Kabbalat Shabbat with the congregation.

After Shabbat dinner, we formed groups for discussion. We studied relevant Jewish texts from the Torah and Talmud. Some from the Talmud addressed not selling weapons to those who would be a danger to others. We considered what it means to “not stand [idly] by the blood[shed] of your neighbor,” as commanded in Leviticus.

Saturday morning we awoke at 6:15 to prepare to travel downtown—some on foot and some by train. We gathered at Farragut Square, where I met up with my parents. Then we walked down Pennsylvania Avenue with hundreds of thousands of others, many of them teens. Walking through a sea of people, I was struck by the fact that everyone was here for the same reason -- protecting lives from senseless gun violence.

I could only get as close as about four blocks from the stage, but large video screens and loudspeakers many blocks from the Capitol enabled everyone to see and hear what was going on.

All speeches were delivered by young people under 18. Naomi Wadler, 11, gave an eloquent, powerful speech, she said, “to acknowledge and represent the African-American girls whose stories don’t make the front page of every national newspaper.” She spoke for nearly four minutes with so much confidence one would think she had been doing it her whole life.

Yolanda King, granddaughter of the Rev. Dr. Martin Luther King Jr, only 9, led the entire crowd in an enthusiastic chant: “Spread the word! Have you heard? We are going to be a great generation!”
We heard from teens personally affected by gun violence across the nation, including Edna Chavez, who lost her brother to gun violence, and several survivors of the shooting in Parkland.

One of the survivors, Samantha Fuentes, who was shot in the legs and has shrapnel permanently buried in her face, came up to read an original poem titled “Enough.” In the middle of reading, she had to pause to vomit. For 40 seconds, the entire crowd in front of the Capitol cheered for her as she regained her composure and exclaimed proudly, “I just threw up on international television, and it feels great!” She finished her poem with confidence, enthusiasm, and passion.
Emma Gonzales, one of the most outspoken leaders of the #neveragain movement, came onstage near the rally’s end. After almost two minutes of speaking, she fell silent and stayed silent for another four and a half minutes before stating that she had been onstage for about as long as it took the gunman to take the lives of 17 people and leave the school. “Fight for your lives before it’s someone else’s job,” she said before walking offstage.

Following the rally, USYers reconvened at Farragut Square to return to the shul, where we heard a presentation by someone from the Brady Campaign, a non-profit organization against gun violence. Then we reflected on the memorable day’s experience.

Motivated, empowered and inspired. That was my answer to the question, “How do you feel after the march today?”

After Havdalah, my dad drove me home. I was exhausted and sunburned, but I was finally able to look forward to a future where students don’t have to practice active shooter drills, where civilians don’t have to fear for their lives on a daily basis. That future doesn’t seem so far away anymore.

(Ellie Schwartz, daughter of Elissa and Jason Schwartz, is a sophomore at Rockville High School.)
at April 04, 2018