Why I Joined Rabbis for Obama

I've received both affirmation and hate-mail in recent weeks for having joined a group called Rabbis for Obama (rabbisforobama.org), a grassroots organization of rabbis from all movements and backgrounds.  Here is why I joined.

My primary reason for endorsing a political candidate, especially given the dangerous overlap between religion and state involved, is that there is a terrible and effective Lashon Hara/Slander campaign against him within the Jewish community.  (Click here for a story reported by the Associated Press about how the Jewish Community in Florida is being targeted in this way.)  I receive countless anti-Obama emails containing innuendo, rumor, guilt by association, and worse.  Efforts to defame him and distort his record are flying in the Jewish internet.  If rabbis who affiliate republican had stepped up and said, "we support John McCain for president but decry the smear campaign being waged in our own community," I'd likely not have joined Rabbis for Obama.  This didn't happen, and the lies within the Jewish community cannot be tolerated, especially when they are attacks upon a long-time friend of the Jewish community.  I joined Rabbis for Obama, stepping into the political conversation as a rabbi, because the Jewish community deserves better than this.

I joined Rabbis for Obama because he stands for what I believe.  When Obama condemned his former pastor's "incendiary language," he did so asserting that vitriolic firebrands "denigrate both the greatness and the goodness of our nation."  Obama demonstrates a proud patriotism, the absence of which I've mourned for at least the past eight years.  I joined Rabbis for Obama because I want to be proud to be an American, and I feel I will be when Barack Obama is president.

I am a Zionist.  And I am critical of many Israeli policies in a similar way to my complex and loving relationship with my parents' home.  Rabbi Arnold Jacob Wolf recently shared that Senator Obama, speaking recently before a Jewish audience in Cleveland, shared the following vignette:  "I sat down with the head of Israeli security forces," he said "and his view of the Palestinians was incredibly nuanced…. There's good and there's bad, and he was willing to say sometimes we make mistakes… and if we're just pressing down on these folks constantly, without giving them some prospects for hope, that's not good for our security."  John McCain's rhetoric, since having begun the presidential campaign, simply scares me.  The black-and-white foreign policy of the far right (which was once not John McCain's donor base but now is) is not healthy for Israel or the world.  I feel secure with an American president who affirms Israel's right to defend herself and also challenge us all.  I joined Rabbis for Obama because Barack Obama will be a president involved in the right ways with Israel's decisions.

Since Sarah Palin joined (took over) the McCain ticket, things have gotten worse.  Her appointment is an insult to Hillary Clinton, rewarding tokenism instead of personal achievement.  Her speeches are full of lies and vitriol.  Her interviews demonstrate an unprepared, spiteful person who has learned the politician's "thumb-jab" but not the universal wisdom of accountability.  Sarah Palin does not belong in the White House.  John McCain the senator would not have endorsed her in this position, and his appointment of her as Vice Presidential candidate is disturbing.  I joined Rabbis for Obama because McCain's choice of running mate was irresponsible, unwise, and dangerous.

Barack Obama speaks this language, lives its call, and will lead our precious country well. 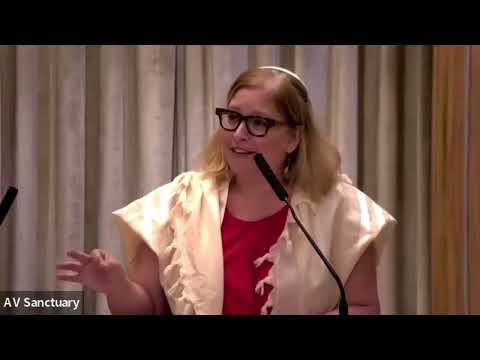