From Yonina Creditor: "A Woman, a Chair and a Wall"

Last Tuesday, I went to a holy place, to daven with a holy community at a holy time – Rosh Chodesh Nissan. I had heard of the Women of the Wall and had the desire to experience their Tefilot, just as I had been exploring Tefilah all over Israel this year. When I arrived at the Kotel, I went to the Womens section and took a moment, as I do every time I visit, to appreciate the historic significance of my ability to stand freely at the Kotel. I always hear the radio broadcast from 1967 in my head, "HaKotel BeYadeinu" (The Kotel is in our hands). I silently thank those who I don't know, whose sacrifices made it possible for me to stand there at all.

It was in that moment that I looked to my left to see the first chair come flying over the Mechitza (divider) of the men's side. Okay, one chair. They are upset. I understand they are not happy. Then three more chairs followed, one of which shattered into lots of plastic shards. The police were called but not before six more chairs were thrown over. I am not sure the Chareidi men throwing the chairs realized they sent us a Minyan (a group of 10) of chairs. We then saw a Shtender (prayer stand) raised but thankfully, it was lowered. No matter how angry these men were, where in the Torah does it say that possibly injuring a fellow Jew is an acceptable practice?

One of the leaders explained to us that if we wanted to wear our Talitot (prayer shawls), then we had to wear them like scarves with the Tzitzit (fringes) tucked into our coats so they would not be visible and Tefilin (phylacteries) were not to be worn. As we were putting on our Talitot, the second wave from the men's side began. Since the chairs did not disuade us, they began calling us Nazis and Amalek. To be honest, I don't know which was worse, being called such names or chairs thrown at me in anger.

With all of this going on, I wondered how I could find the Kavanah (intention, focus) to pray when I was fearful of my safety, even with the female officers in riot gear assigned to protect us. I also began to wonder if fighting to be able to daven at the Kotel as a Conservative Jew was worth all the trouble. I never doubted my beliefs before and now I was questioning my right to daven with my Tzitzit, Kippah (head covering) on my head and to sing out loud all the while surrounded by hostility. I feared for their safety of the female police for putting their lives in danger in order to defend Jewish women from Jewish men.

Davening started and shortly there after, this group of men began to yell, not sing, their prayers. They reminded me of the opening scene in 'Gladiator,' with the Germanians yelling their battle cry, whipping themselves into a frenzy before going into battle with the Romans. I was waiting for those men to charge over the Mechitza. I tried to daven as I waited to see what the next assault would be. Thankfully, it did not come.

It was not until the Shema when I felt the deepest frustration and sadness. I could nto reach my Tzitzit. They were tucked into my coat as instructed. I struggled with my coat and could only grab 3 strings. I wrapped them around my finger, shielding what I was doing by bending slightly. When I get to the third paragraph, I awkwardly bent down to kiss those precious Tzitzit. I said the words "Ure'item Otam," and you shall see them, knowing that I was told that I could not see them – not at the Kotel.If I have to daven in a way that shames and belittles my beliefs and the words of the Torah, then why do it? Why try to have Kavanah when men were screaming not 20 feet away? This is not Tefilah (prayer) and this is not what Hashem (God) wants from me – being fearful and shamed for being Jewish!! This is not a Nazi regime, so why are the Charedim taking a page out of the Nazis playbook and using it against other Jews?

Those men continued their frenzied screaming throughout our davening of Hallel. At one point, we began to sing a Niggun (tune with no words) and for a split second, those men who hated us enough to desire physical and spiritual harm upon us joined in. For that one moment, I believed the phrase "HaKotel LeKulam" (the Kotel belongs to everyone), for in that instant, we sang together in harmony. Sadly, it was a fleeting moment but one that could be glimmer of hope for future peace.

Six days have passed and I still struggle with whether the fight for religious freedom at the Kotel is worth all this pain. I hear the recording, "HaKotel BeYadeinu" and think – no it is not. HaKotel BeYedaihem (the Kotel is in Their Hands) and they are afraid to share. I don't know what these Chareidi men fear from a group of women who have such love for Hashem and Torah that we take upon ourselves Mitzvot (commandments) that are not forbidden to us according go the Torah and Rabbinic literature. Therefore, I will return next month to Daven at that holy place, with that holy community, at that holy time because I want to show Hashem how much I love being Jewish and am willing to sacrifice my comfort for Keva (technical) prayer and trade a peaceful prayer space for the right for my voice to be heard at the Kotel.

Honored to have been part of this year's International March of the Living​ Memorial Tribute, honoring their Holocaust survivor educators who passed away recently. These courageous survivors accompanied students on the March Of The Living sharing with them their moving stories and important lessons so that the history of the Shoah is never forgotten. Deep gratitude to Cantor Aviva Rajsky​ and Tom Bellman​ for their beautiful rendition of #OlamChesedYibaneh. #BuildOnLove 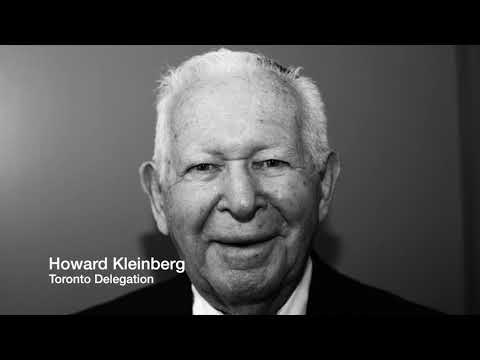