This week's Supreme Court hearings on the president's health care plan will likely generate this court's signature decision of a generation. That but a few of the complex matters pertaining to our country's long debate over health care should finally come before the court is no surprise. As de Tocqueville observed about American courts in the earliest days of our republic: "Few laws can escape the searching analysis of the judicial power for any length of time." It was inevitable, therefore, that one of the most significant laws concerning health care to ever be passed in the United States would be subject to Supreme Court scrutiny. 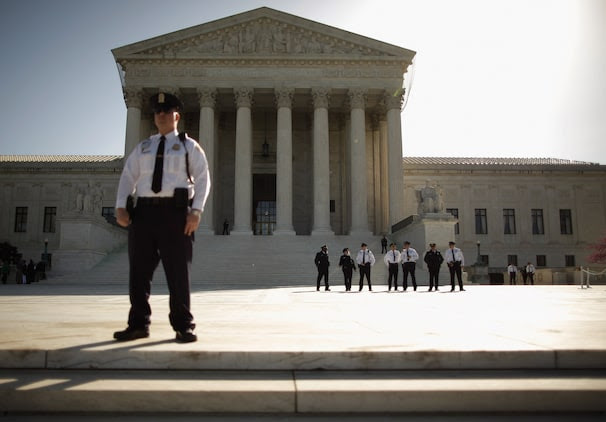 Police officers keep a close watch on people demonstrating in support of and against the Patient Protection and Affordable Care Act outside the U.S. Supreme Court Building on March 26, 2012 in Washington, DC. Today the high court, which has set aside six hours over three days, will hear arguments over the constitutionality of th act. (Chip Somodevilla - GETTY IMAGES)

The resolution of the issue of the constitutionality of the individual mandate by the Supreme Court, however, will not resolve the deeper issue of whether American society views itself as an "American community." If we are a community, then we are faced with two fundamental questions: First, do we believe that there is some minimal level of care for physical wellbeing to which every member of that community is entitled and second, how do we go about deciding how much that basic level ought to be?

A means to addressing these questions is well-established in Judaism, whose guiding ethical principles are animated by fundamental assumptions of the interdependence of the human family. Because many of the basic commandments require as many as ten people in order to fulfill them, Jews must live in community in order to meet the obligations of Jewish religious life. Hence, the basic necessities for sustainable community are enshrined in our tradition.

The Talmud, a far-reaching collection of Jewish law and principles, lists 10 public services that a community must provide, three of these relate to basic public health and sanitation - public baths, public toilets and a doctor. The others include a court of justice, a charity fund, a house of worship, a schoolmaster, a notary and experts to oversee ritual matters. The 16th century compilation of Jewish law, the Shulhan Arukh, states that where doctors reducing fees to care for the poor is not sufficient, the community must provide a fund. Consistent with this and many other related dicta in Jewish tradition, the Rabbinical Assembly, the international community of 1600 Conservative rabbis passed resolutions on health care in 2002, 2008 and at our last convention in March 2011 in support of the Patient Protection and Affordable Care Act of 2010.

This issue was also noted many times by the late Dr. Lowell Eliezer Bellin, who served as Commissioner of Health of New York City from 1974 to 1976. Dr. Bellin, who also happens to be my father-in-law, was the first director of the Medicaid program in New York City, the largest in the country. Almost, fifty years ago, he spoke of the unavoidable need for a system of coverage that would provide health care to all. To read his papers and articles you might think that time has stood still. We are still wrestling with the same basic issues of health care delivery he confronted at the advent of the Medicaid and Medicare programs, the first government-funded national health care plans, outside of the military, in the United States.

A practitioner of internal medicine in the days before Medicaid and Medicare, he rejected both as a matter of experience and as a matter of public policy the notion that the private sector and charitable works by health care providers, no matter how well-intentioned, could ever successfully address such a sweeping moral and demographic problem as the provision of health care. Dr. Bellin's forceful moral voice in public health and strong willed ability to produce results might have pointed him towards Washington. He never got there. At the age of 52, he was diagnosed with Parkinson's disease with which he suffered for 17 years. The struggle with such a debilitating and long- term illness brought home to the family the rectitude of his principled stance.

I brought my nine year old son, Noam Eliezer, named for his grandfather, on a brief trip to Washington recently. We spoke about the legacy of his grandfather and the opportunity that we have in an open democracy to convey Judaism's call for justice in a nation where it might be heard and heeded. Judaism teaches, "it is not upon you to finish the task, nor are you free to desist from it." My father-in-law saw the moral obligation and the practical urgency for a system that would provide health care for all. "I feel very grown up," Noam Eliezer told me. Be it sooner or later, if Americans are to live as a community, we will all need to act more "grown up" and to face the difficult decisions required to realistically face this problem. We cannot let 50 more years pass, a universal system of health care is a moral mandate that a society seeking any measure of justice must have.

Rabbi Julie Schonfeld is the executive vice president of the Rabbinical Assembly.