Want to know what it's like in Israel right now? 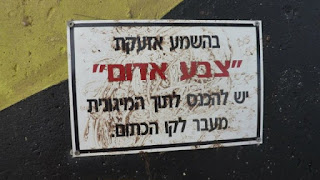 Want to know what it's like in Israel right now? Let me tell you- 75,000 People are waiting in the ready for their phones to ring calling them up from the reserves to active military status. 25% of the country has under 20 seconds to get to a bomb shelter if the air raid siren goes off.

Similar to 9-11, cell phone service after a "red alert" doesn't always work. (My way of communication with family during that time is by using the internet.) Like in a natural disaster, a school shooting, a plane crash, or the entrance into Iraq by the US military- the news is always on on the house waiting to hear the latest update.

You're in your car driving to work/school/the beach and all of a sudden the program is interrupted saying "red alert. red alert"- that means that there is a rocket on the way. You have 15-20 seconds to get to a bomb shelter.

Weddings and public events in 25% of the country have been canceled due to not having a bomb shelter large enough to hold all of the guests.

The most popular (in my opinion) application that has been downloaded to Israeli smart phones with such frequency is the one that alerts you to where the rockets are being shot and if you need to get inside.

There are thousands of families who have contacted various organizations that have said that they have room in their house for total strangers if they are in need of a place to stay until the violence is over.

All the while, despite of this, people are still going to buy a cup of joe, going out to movies, restaurants and the like, and still living heir lives.