Watching Comedy (sort of) on Tisha Be'Av with my daughter 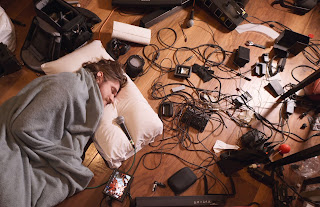 With just a few hours of Tisha Be'av left, my daughter and I sat down to watch Bo Burnham's Netflix special "Inside." It felt strange, I said, to watch a comedy special on a mournful day, but Ariel, who had seen it already, recommended it, and I was happy for the company and for the distraction from my rumbling belly.

It was devastating and amazing and I never want to see it again. Burnham's dizzying pace and satiric truth-telling are reminiscent of his earlier work, but this was a categorically different experience from his earlier work. It reminded me more of Cormac McCarthy's "The Road" than a comedy special. With fragmentary light, this was a deeply artful and frighteningly baring exploration of the Pandemic's impact on life itself.

I don't want to go too far in any comparison, but having myself sat in front of both the world and noone every morning for 16 months, sharing from my craft and from my soul, with none of the energy of a live class or congregation, I felt some resonance in Burnham's eyes. He hid nothing. It was scary to see the depth of his honesty. Ravaging even.

And that is why my daughter's recommendation was so attuned to Tisha Be'Av. On this day we are called by ancient tradition to face our world's destructions head-on, no production team making the lighting just right, no filters to erase the fissures of reality.

Halfway through the day we begin greeting each other again, emerging from the ritually-guided mourning. Because we are not meant to remain inside. That is where Tisha Be'Av multi-millennia wisdom surpasses Burnham's COVID period piece, brilliant though it is.

Tisha Be'Av is a container for the misery, with rituals that make the pain felt, and with a scheduled conclusion. As the sun begins to set and the minutes of Tisha Be'av are numbered, as the echo of Burnham's pained laughter (hopefully) fade in my mind, I bless us to never forget the lessons we've so painfully learned these long months, but more than that: to internalize an ancient teaching about Tisha Be'Av and offer it to a world in deep need of comfort:

Those who remember the destruction will merit to be part of its rebuilding. May we be so blessed.

An invitation to share joy in community! Reeh #MorningTorah #Broadcast351