note: perhaps a bit Jesus-heavy, but useful to many faith-based organizations! -rmc

What if we could step outside the way we think about organizations; what might we imagine? Imagining other ways of working together is a challenge because the images we consciously and unconsciously hold of organizations are powerful. Gareth Morgan, a professor at York University in Toronto, Canada, and a consultant on managing change in organizations, has tried to do that. His books Imaginization and Images of Organization have helped many people break out of the thought prisons to which their lives in the world of organizations have confined them. His message is simple: people cannot develop new ways of organizing themselves to listen and more effectively respond to the challenges they face while working with the images of organization and leadership they have relied on in the past.

This means that those of us concerned with church governance must seek to reimagine how people responsible for governing a congregation or other church body might order themselves if they truly seek to listen to God and more effectively carry out their work. Morgan suggests that if we are to really change, we must be willing to suspend our images of what organizations should look like and to explore new ways of organizing ourselves to do the critical work before us. He draws heavily on visual images that we do not normally associate with organizations, such as termites and spider plants. His purpose in picking such unusual imagery is to help us shake free of our thought constraints by asking us to look at other ways nature is organized.

I had a Morgan-esque "aha" moment in my thinking about organizations. I was sitting at my desk preparing to talk to a group of educators about servant leadership and reflecting on Luke's account of Jesus's conversation with his disciples about who was the greatest. Jesus's response caused me to pause for a moment. "The kings of the Gentiles lord it over them; and those who exercise authority over them call themselves Benefactors. But you are not to be like that. Instead, the greatest among you should be like the youngest, and the one who rules like the one who serves" (Luke 22:25–26, italics added). An innocuous pyramid-shaped organization chart on my desk caught my eye. Many people have used the imagery of an upside-down pyramid to talk about what it means to be a servant, but that day as I rotated the organization chart in front of me 180 degrees so that the top of the pyramid pointed straight down, I made a number of intuitive connections that have continued to feed my imagination. Across the room sat a large clay bowl; I picked it up and turned it over and held it at eye level. The side view of the upside-down bowl looked remarkably like the pyramid, and the bowl, when sitting normally, looked like an upside-down pyramid. The images of a potter carefully shaping a bowl from a lump of clay and the clay basin that Jesus must have used (John 13) when he washed the disciples' feet and admonished them to do the same flashed to mind.

The bowl shape stuck, and I have used it ever since as a tangible contrast to a pyramid to explore the implications of being a servant and leader in the world of organizations. In addition to using bowls to hold water for foot washing, the church uses bowl-shaped objects to baptize, to serve wine as we celebrate the Eucharist, and to offer water to the thirsty and food to the hungry. We cup our hands to receive and to lift up and let go as we might do with an offering. Each is a bowl-like action. The processes of caring, developing, and sending forth that are so vital in families, communities, and congregations also evoke for me images of hands opened and turned palm up as if to lift and release. 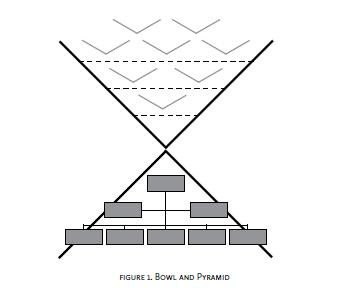 While the bowl imagery has continually fed my imagination, others have been less enamored with it. I remember taking the organization chart of a congregation I was working with and rearranging the boxes used to denote various staff positions, committees, and boards so that the governing board was at the bottom of the bowl. Above the board members were the senior pastor, staff, and other boards and committees. All were arrayed to support the members of the congregation and school in their work both within and outside organization. Above that was the community surrounding the church and school. After rearranging the boxes, I suggested we replace each box with a small shallow V shape to symbolize support and openness. Everyone thought the model helped him or her understand the congregation's ministry better. There seemed to be a genuine excitement in the air about this different way of seeing.

On a return visit, however, I noted that the hierarchy and boxes had been restored. When I asked why, I learned that the people in leadership positions were so accustomed to hierarchy that they simply could not get their minds around another way of doing business. They could talk of being a servant, but they couldn't imagine an organization as anything other than a pyramid. Perhaps more disappointing was that the loss of the idea that the governing board and senior pastor were serving the staff, serving their members, and serving the community. The idea that everyone in the congregation was serving the institution had been restored. Sadly, we did not have the opportunity to explore other metaphors that may have helped this particular board get beyond the hierarchical model to which they were so deeply wedded.

The point of this personal narrative about reimaging organizations is not to argue for the bowl as the replacement for the pyramid, although I find the bowl an extremely productive image. Morgan suggests dozens of images, any one of which can help open people to different ways of thinking about organizations. These different ways of thinking are essential to our being able to create structures that enable us to be more faithful stewards of the gracious gifts God has entrusted to us. Our challenge is to simply be open to the new things God is doing in our midst, and we can't do that when we are enslaved by images of how people must organize themselves to respond to God's invitations. Our world is continually changing; so must we.