Rabbi Julie Schonfeld in ynetnews.com: 'Israelis should stand up to haredim'

Rabbi Julie Schonfeld in ynetnews.com: 'Israelis should stand up to haredim'

Julie Schonfeld, highest ranking female rabbi in the US, urges Israelis to stand up and oppose religious establishment. 'You're suffering religious oppression and coercion, wake up,' she says

New York – "We are approaching a situation where a person cannot be a Jew in Israel, the haredim have hijacked Judaism," says Rabbi Julie Schonfeld, executive vice president of the International Rabbinical Assembly, the association of Conservative/Masorti rabbis and one of the most important and influential women in the American Jewish community, openning our conversation.

Schonfeld, who is following the religious radicalization in Israel and the exclusion of women from the public arena with great concern, says she cannot comprehend why secular Israelis are not protesting. "Society needs to join together to prevent the haredim from breaking the law," she says. "When they dressed up haredi children in Holocaust victims' clothing I was outraged. This is a real obsession, insanity. This has no connection to Judaism."Schonfeld, 46, is presently the most prominent woman rabbi in the US and in the Jewish world. She serves as the leader of more than 1,600 Conservative rabbis worldwide and is the first woman to hold such a senior position. Newsweek magazine crowned her as one of the 50 most influential rabbis in the United States, as did The Forward. Several weeks ago she was honored by Jewish Women International as one of the Ten Women to Watch."Judaism flourished for hundreds of years because it allowed people to express themselves in the way they felt it appropriate. Today there is oppression of Jewish life by Orthodox rabbis whose positions are financed by the government of Israel," she explains."What happened in Beit Shemesh is perverse and violent behavior. Violence against women and other segments of the community – this behavior is hooliganism and delinquency in the guise of religion which the state allows to happen… It obligates the state to restore the rule of law. This is a frightening task, because people are likely to get hurt."I am in favor of impinging on the freedom of expression of haredim. They are entitled to say whatever they want, but they are not permitted to throw stones, to harass, to spit and to prevent children from walking to school," she states

"For many years I have been following these events and I have made several trips to the country and I see that it's just getting worse," Schonfeld recounted.

During a recent visit by a delegation of Conservative female students to the Western Wall, she continued, "They (Haredim) threw stones and behaved wildly toward them. The Western Wall doesn't belong only to the haredi community. It belongs to the Jewish people. The haredim have simply hijacked Judaism and want to strangle the Jewish soul. They want to take control of Jewish history, culture and all parts of Judaism."Judaism is more than religion. It is also soul," she continued. "Today in Israel you cannot bury your loved ones in the manner you wish. You cannot get married according to your religious beliefs. Women often suffer greatly through the divorce process. The haredim even control divorce. This is religious harassment. This is what we don't understand here in the United States. We don't understand how this doesn't bother you. Wake up."

The Rabbinical Assembly which Schonfeld heads is the international umbrella organization of Conservative rabbis.

Conservative Jews assert that Halacha should be flexible and suited to the demands of time, but oppose extreme deviations from the principles of Halacha. The Conservative movement in Israel promotes religious openness and pluralism. 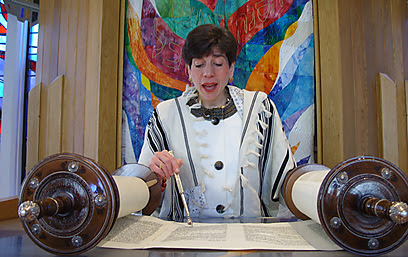 "Israel's Declaration of Independence promised freedom of religion, conscience, language, education and culture," Schonfeld says. "It is deeply offensive when somebody says to me – as a believing Jew and a rabbi – that my wrapping myself in a tallit constitutes a desecration. It insults me when the State gives this its legal sanction.

"Today, Israelis are living in a situation of religious oppression that prevents them from self-expression as Jews. The situation is so serious that we fear for the security of Israel and the loss of connection with Jewish youth in the United States."Jewish youths in the US, she added, see what is happening with haredi fanaticism and are concerned about visiting Israel. Schonfeld warns that such sentiments may cause Israel to lose the support of the younger generation in the US.And the recent campaign by the Ministry of Immigrant Absorption to encourage Israeli emigrants to return to Israel, which in her opinion simply ridiculed Judaism in the US, is not helping either. "This showed how much Israelis don't understand how we view Judaism in America. In Israel they don't understand that you can be Jewish without being Orthodox. It's not their fault, but a product of your educational system that teaches that the Orthodox way is the only way. You are funding from your own pocket a system that diminishes your Judaism," she says.

'Israelis should be allowed to choose'

Schonfeld also warned that the growing alienation from Judaism, in all its forms, in Israel, is contributing to a rapidly approaching situation "in which you won't be able to be Jewish in Israel."

"Take for example the issue of marriage. Israel must have civil marriage. It must allow people to get married according to their own choice. This is a civil society. In a democratic state you must allow for the right to chose how to marry. We believe that if you give Israelis the right to chose, they will choose a Jewish wedding. But give them the right to choose, without coercion, because this makes Judaism meaningful."In an attempt to encourage the right of choice for Israelis on the subject of marriage, the Conservative movement in Israel recently sponsored an alternative weddings campaign. Some 25,000 couples expressed an interest in the ceremony.Schonfeld was thrilled: "This is just a small example of what could happen. At the end of the day it's a struggle for the Jewish soul," she says. "Let other Jewish approaches prosper in Israel. That's my dream. My goal is that Israelis should be allowed to choose how to realize their Judaism in a liberal and enlightened way."Judaism should be a light unto the nations," she added. "The Orthodox comprise only about 15% of Jews in the world, yet they think that we – the 75% who are Reform and Conservative – are the exception. The time has come to tell them that they are not the only authentic form of Judaism."But cant religious coercion really damage Israel's security? Rabbi Schonfeld believes so. "US Jewry is perhaps the Israeli people's most strategic asset. US Jewry advocates for Israel's security and other needs. When younger Jews hear that in Israel Conservative and Reform Jews are not considered Jews, it is difficult for them to identify with Israel as a Jewish nation."If the message emanating from Israel is that you alienate children and women, then Jews in the Diaspora will be alienated from what happens in Israel. You can see young Jews today saying they have no connection to Israel. When they become adults they will not support Israel and will not defend her. This won't happen in another generation. It's already happening."

Schonfeld is also furious about the government's budgetary discrimination between the various Jewish movements: While the Conservative movement receives only $50,000 annually in government funding, the Orthodox streams receives $600 million.

"Orthodoxy – represented by the Rabbinate and the haredim – withhold funds from us so that the Conservative and Reform movements cannot develop in Israel. This, in my eyes, is a scandal. Israel only pays salaries to Orthodox rabbis. In our case, we have to pay the salaries of Conservative rabbis in Israel."There are many small cities and new communities in Israel that want Conservative congregations, but we don't have the money to build synagogues and institutions for them." It seems, she says, that Conservatives "are simply not wanted at all in Israel."
---
Rabbi Menachem Creditor
Congregation Netivot Shalom  || menachemcreditor.org
Rabbis for Women of the Wall || Bay Area Masorti ||  ShefaNetwork
To join Rabbi Creditor's email list, send a blank email to thetisch-subscribe@yahoogroups.com.
Check out my new album, "Within" on itunes!
at February 17, 2012