To get to Joe Manchin’s private office in the Hart Senate Office Building, you first pass through a lobby where you encounter a small bronze statue of an Old West lawman holding a firearm — an award given to Manchin several years ago by a chapter of the National Rifle Association for his unswerving defense of gun rights. Then you turn down a hallway, past several framed photographs of children who were victims of the massacre a year ago at Sandy Hook Elementary School in Newtown, Conn. The combination of the bronze rifleman in the lobby and the young faces on the wall suggests a particular viewpoint — I stand with gun lovers; I stand with victims of gun violence — that qualifies, in Washington anyway, as being nuanced, which is to say politically ill advised if not suicidal.
Even sitting behind his stately wooden desk in a suit and tie, Manchin, who is 66, possesses the craggy appearance of a small-town sheriff. As he proclaimed to me one morning in September, “I enjoy my guns, and my family enjoys their guns.” And indeed, Manchin, a conservative Democrat from West Virginia, won election to the U.S. Senate in 2010 partly on the strength of a memorable TV ad depicting him firing a bullet through President Obama’s cap-and-trade bill that had been anathema to coal miners in his state. But Manchin’s outlook changed the day he came back from a hunting trip last December, having learned of the 20 children and six adults slaughtered at Sandy Hook. That unique horror motivated him in a way that other recent mass shootings in Tucson and Aurora, Colo., had not.
“To sit here and do nothing, I could’ve done that all day long,” Manchin said. “Let this be the happy retirement home.” Instead, for the first time in his 30-year political career, he acted against the N.R.A.'s wishes. He introduced legislation that would require universal background checks for commercial sales. Background checks have been federally mandated for firearm purchases from licensed dealers since 1994. The bill would have extended them to gun shows and all Internet sales. Manchin was aware that universal background checks would not have prevented the Newtown killings, because the shooter, Adam Lanza, used firearms that were legally purchased by his mother. Nonetheless, a confluence of factors at the time favored his efforts: a newly re-elected Democratic president personally stung by the gun tragedies that took place on his watch; a fractious and self-doubting Republican Party; the seemingly bottomless financial resources of the New York mayor and ardent gun-control advocate Michael Bloomberg, whose alliance of more than a thousand mayors throughout the United States, Mayors Against Illegal Guns, would sponsor an aggressive wave of TV ads; and the forceful but sympathetic lobbying presence of Gabrielle Giffords, the former congresswoman who had been shot in the head in Tucson, along with the voices of the Newtown parents whose children were killed. Given this climate and the overwhelming public support for universal background checks, even the N.R.A. was braced for the passage of some version of Manchin’s gun-control bill. 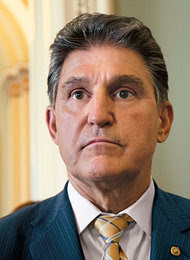 Senator Joe Manchin of West Virginia came to support a gun-control bill.
But no version did pass. Four months after the Newtown shooting, on April 17, the bill failed to win the necessary votes to make it through the Senate. The most fearsome lobbying organization in America prevailed once again. Other victories would soon follow. On the day before I visited Manchin’s office in September, two state senators who spearheaded a recent passage of tough gun-control legislation in Colorado were recalled — another triumph for the N.R.A., despite having been outspent by Bloomberg’s group. (A third Colorado state senator who supported the bill announced her retirement last month in the face of a recall.) Not long after that, a mentally unhinged gunman at the Washington Navy Yard, less than two miles from the Senate office buildings, killed 12 employees. In his eulogy for the victims, the president noted somberly: “Once more our hearts are broken. Once more we ask why.” But few were asking why Joe Manchin or some other senator wasn’t out trying to round up more votes for his bill. If the murder of 20 schoolchildren had proved insufficient motivation to address gun violence in America, this killing was not enough to persuade anyone to take on the N.R.A. again.
“As far as putting on a full-court press, I don’t see that happening,” Manchin told me in his office. “And I don’t hear much conversation about it.” The defeat of the bill has added to the legend of the gun lobby’s brawn. Though the N.R.A.'s opponents still question whether the group is really as indomitable as it is perceived, at a certain point, political mythology engineers its own reality. One recently retired congressman from a conservative district told me, “That was the one group where I said, ‘As long as I’m in office, I’m not bucking the N.R.A.’ ”
Still, a year after the Newtown killings, the question of why nothing new has been done to address America’s gun violence is a vexing one. To begin to answer it requires a close look at why Joe Manchin failed in his effort to pass a fairly minimal change — closing loopholes in the existing gun laws. The defeat of the bill not only provides a case study in how the N.R.A. operates but also reveals its potential frailties. Whether the N.R.A.'s new and well-financed adversaries can exploit them is another matter. Doing so will most likely involve more than just standing up for the vulnerable young faces on Manchin’s wall. It will also require taking stock of, and appreciating, the resonance of the armed figure in his lobby.
President Obama was at his desk on the afternoon of the Newtown shootings, when two speechwriters, Jon Favreau and Cody Keenan, entered the Oval Office to receive his edits of the statement they wrote about the horrendous episode. “I can’t read that,” Obama said quietly, crossing out a couple of lines. “I won’t be able to get through them.”
That evening, Obama convened a group of top aides in the Oval Office and informed them that passing gun legislation would now take priority in his already-cluttered second-term agenda. Five days later, at a news conference, Obama announced that Vice President Joe Biden would be leading a monthlong search for “proposals that I then intend to push without delay.” When a reporter asked, “What about the N.R.A.?” the president replied: “Well, the N.R.A. is an organization that has members who are mothers and fathers. And I would expect that they’ve been impacted by this as well. And hopefully they’ll do some self-reflection.” 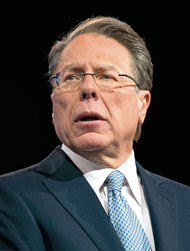 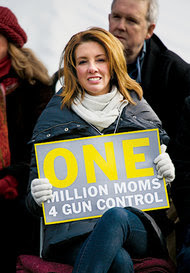 Shannon Watts, who started Moms Demand Action, at a rally in Washington in January.
If part of this early stage is figuring out how to exploit the N.R.A.'s vulnerabilities, Glaze and others must also face up to why it is that the N.R.A. has continued to beat them soundly and far more consistently than the Republicans have defeated Democrats — namely, by motivating its supporters to make themselves heard in a way that gun-control adherents haven’t. One gun-control group that seeks to close the intensity gap is Moms Demand Action, which was started by Shannon Watts, a 42-year-old Indiana-based public-relations veteran and mother of five, the day after the Newtown shootings. “I think what’s been missing are the voices of mothers,” Watts told me. Most gun-control organizations “have been run by men,” she said. “Women are the caretakers of the family, and the ones who make most of the spending decisions. Most of us don’t realize — I certainly didn’t — that it’s easier to buy ammunition than Sudafed. But the massacre of innocent children in the sanctity of their schools woke us up.”
Though underfinanced, Watts’s group (which, she says, consists of 125,000 volunteers nationwide) has staged attention-getting Stroller Jams — rallies of women with strollers at state capitols and congressional offices — and pressured Starbucks to request that customers not bring firearms into its stores. More often than not, Watts told me, men with semiautomatic weapons slung over their shoulders show up to her group’s events, and she routinely receives vile phone messages and threats against her and her children.
While Moms Demand Action employs confrontational tactics, Gabby Giffords and Mark Kelly have opted for a more soothing approach. Following the defeat of the background-checks bill, Giffords and Kelly, co-founders of Americans for Responsible Solutions, have spent much of their time touring rural regions and meeting with gun owners. “We’re trying to make it a habit to engage with folks who don’t think we’re on the same side of the issue,” Kelly told me the day after he and Giffords visited a gun show in upstate New York. “More than anything, they just want to be listened to — and to hear that we know something about where they’re coming from. Hell, I’m as much of a supporter of the Second Amendment as Wayne LaPierre. I’d far rather spend my day at a gun show than at an antique show.”
But the point behind this blue-collar diplomacy, Kelly told me, is to build consensus on addressing a painful conundrum: “It’s been almost a year since 20 schoolchildren were massacred, and so far our national response has been to do nothing.”
“Washington, D.C., is a difficult place to get things done,” Nicole Hockley said with arch understatement when I visited her in Newtown one morning recently. The first time I met her, two weeks after the defeat of the background-checks bill and less than five months after the death of her son Dylan, Hockley seemed freighted with a bottomless fatigue. Though grief was hardly behind her, she now appeared more buoyant and intent on rising above the legislative mire. Recently, Hockley said, she spent several days attending focus groups of gun owners in Memphis, Phoenix and Chicago. Sitting in a dark room and peering through one-way glass, she listened as people who looked and sounded very much like her spoke of their love for their children and their affection for their firearms. It struck her, she told me, that “only one out of more than 60 didn’t support background checks.”
Hockley also recently met with a firearms instructor to learn more about the Bushmaster semiautomatic rifle that Adam Lanza used to kill her son. She said she has a “perverse need” to come to terms with the weapon used to shoot Dylan, as part of a larger attempt to understand gun culture. Her effort represents a way of doing individually what those in the gun-control movement might need to do collectively — break down the barriers of fear and mistrust from which the N.R.A. derives much of its power.
As the instructor spoke, she stared at the weapon and listened intently. He asked her whether she would like to shoot it or at least hold it. Hockley shook her head. “This is as far as I can go today,” she told the instructor with tears in her eyes. And that was the way these things would have to progress, in unsteady little increments.