A Prayer in Honor of Martin Luther King Jr. Day

A Prayer in Honor of Martin Luther King Jr. Day
Adapted by Rabbi Menachem Creditor from a prayer by Rabbi Lilly Kaufman (http://www.rabbinicalassembly.org/story/prayer-honor-martin-luther-king-day?tp=205) 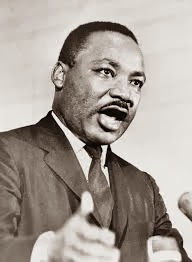 We know Dr. King would have faced hard facts today, and he would have made sure we faced them right by his side.

Dr. King, your servant,
would speak truth about the astounding costs
of financial corruption, of institutionalized inequality;
he would have forced us to see the costs of "free trade":
27 million people today still cursed to live in slavery.

He would have seen beyond the numbers,
to the faces of people.

He would be preaching now
a determined, measured, poetic, prophetic outrage.
He would be teaching by example
our civic duty of compassion,
the obligations of citizenship,
and the grave danger of cynicism.

He would challenge the damaging notion
that money equals speech in a democracy.
When he gave his life for peoplesʼ rights
of speech, and assembly, and the vote,
it was for people who had no money to pay for speech.
They knew speech as an unalienable right,
and their wealth of spirit sufficed.

... grant that we will always reach out
for that which is high,
realizing that we are made for the stars,
created for the everlasting,
born for eternity.

Dr. King's story is not to be appropriated as a tool for easy comfort and self-satisfaction by the established, by the well-off. His words were honed sharp by the depth of his righteous rage at society's inequalities. And those dreams he dreamed are, and forever will be, dreams worth dreaming. We lost our teacher so many years ago. But we have not lost his challenge to not search for consensus but to mold consensus by the power of our convictions.

We gather this morning to remind each other how to dream and how to act in Dr. King's spirit. For as he taught, "We must learn to live together as brothers [and sisters] or perish together as fools." And we'd like to not be fools, Lord, alone in our suffering. We've got so much to do, and the good news is there is more than enough power in our community with which to see it done.