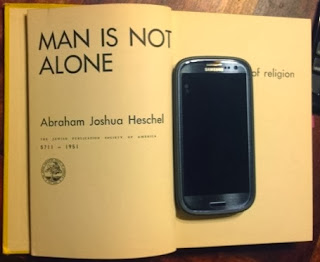 I had a drasha (sermon) fully prepared for today's Shabbat davening. It was going to focus on the Exodus narrative and the Jewish implications of the biblical Passover sacrifice. Then a cellphone went off during services, both reinforcing the urgency of my intended message and reminding me of the perils involved in delivering a passionate message.

The cellphone rang during a particularly quiet moment of services, and the owner fumbled for a moment, so startled they forgot, momentarily, how to silence the sound. I counted to ten, and then walked over to the person, who was still holding their phone - a violation of Shabbat norms in my community.

There  was obviously nothing malicious about the phone going off, nor in the temporary difficulty its owner had in turning it off. And yet its sound tore at something primally important in the sanctuary: the essential "energy" of Shabbat, which is designed to be an antidote to the constant alarms of our hyper-connected technological age. Shabbat is a breath of uncluttered air in an infinitely distracting world. So that phone wasn't just a phone. It was an "anti-Shabbat siren," brutally tearing Shabbat out of the very air. It was, therefore, truly difficult to contain my own disappointment at its invasion of our sanctuary, to temper my own fiery response to this weekday-contamination of Shabbat.

My carefully expressed words "I'm sorry. You'll need to keep your phone off during Shabbat" couldn't have masked the fire I felt in my own eyes. I saw this reflected in the phone-owner's eyes, and became instantly concerned I had violated one Jewish principle (human dignity) for the sake of another (Shabbat observance).

The drasha I then delivered addressed a related idea: the dire need for more attention to be paid to particularly Jewish behaviors in the context of my shul community's deep and profound commitment to universal justice. The morning's Torah reading included the original Passover offering, the ritual of circumcision, the blood placed on the Israelites' doors just before the final of the ten plagues, and the command to teach every next generation that the liberation from Egypt is not to be understood as "freedom from bondage" but rather as, "freedom from slavery to now serve a holy purpose."

In other words, the role of these (and other) rituals is to affirm the particularly Jewish identity that today compels a Jew to act in solidarity with others. We know what it is to be oppressed, and are therefore called to channel that experience into the commitment to being liberated with all people. As the great Rabbi Abraham Joshua Heschel put it: "The child becomes human, not by discovering the environment which includes things and other selves, but by becoming sensitive to the interests of other selves. (Man is Not Alone, 137-8)"

My message was a cautionary one, reminding a Jewish community of passionate activists that Jewish universal concern is rooted in Jewish self-awareness, in the embodied knowledge of our own story (including such rites as circumcision). In short, it is good to be good. But being good is not the same as beeing a good person who is a passionate Jew, manifesting our People's textured story, being fluent in, as my teacher Rabbi Jay Michaelson puts it, "the vocabulary of our own souls. (from Everything is God)"

Back to the unfortunate owner of that loud cellphone.

When services ended, there he was, waiting to speak to me. To be honest, I wanted to apologize for making him uncomfortable. The last thing I mean is to judge someone for a different pattern of observance, or for not knowing, or for a simple mistake. Shul is meant to be a sanctuary from judgment as much as it is meant to be a shield from the incessant buzzing of the world.

But when we found a moment to connect, and I offered my apology, he looked into my eyes and said, "Not at all, Rabbi. I haven't ever really thought before about preparing myself for Shabbat, never taken the step of turning anything off so that I could be part of the Shabbat spirit. I'm gateful that this community takes Shabbat seriously enough to cultivate it. It was probably harder for you to find a way to communicate this with me than it was for me to hear it."

Besides my deep relief at not having offended another person, I also felt an incredible affirming from his reflecting back the precious value of Shabbat.

It is said in Jewish tradition that Shabbat is meant to be "a taste of the world to come." This mornings's experiences further convinced me that if we, as Jews, are going to help transform this world into the next one, then becoming fluent in the vocabularies of our own Jewish souls is a mandate worth strengthening. I was reminded, thanks to our beautiful Shabbat this morning, that when self-awareness is intertwined with mutual concern, the world to come can feel just a bit closer.
at January 04, 2014