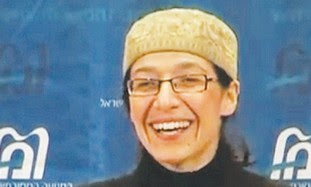 A Masorti (Conservative) rabbi has quit the Schechter Institute of Jewish Studies in Jerusalem in acrimony over the exclusion of openly gay students from its rabbinical studies program, The Jerusalem Post learned on Thursday.

Rabbi Tamar Elad-Appelbaum, former associate dean at the seminary, resigned this week because it allegedly reneged on a promise to ordain homosexual students, a source said.

"She was promised two years ago when she entered the position that they will ordain LGBT students," the source said. "She learned this was not going to be the case two weeks ago and quit." Elad-Appelbaum did not answer her phone on Thursday but several sources verified the story.

The Schechter Institute issued a response expressing regret over the rabbi's decision to leave, without elaborating on the circumstances of her departure.

"The Schechter Rabbinical Seminary received Rabbi Tamar Elad-Appelbaum's resignation with great regret," said Rabbi Prof. Hanan Alexander, chairman of seminary's board of trustees. "Rabbi Elad-Appelbaum contributed enormously to the seminary during her tenure and we wish her every success in her future endeavors."

The row between the seminary and the rabbi is part of a larger debate taking place within the Conservative Movement over its policy toward homosexuality. During the 1990s some of its rabbis embraced the gay community and welcomed its members into its ranks while others adhered to the traditional halachic ban against same-sex relations.

In recent years two of its most important religious schools, the Ziegler School of Rabbinic Studies in Los Angeles and the Jewish Theological Seminary in New York City, have opened their doors to LGBT students. But the Schechter Institute in Jerusalem under the presidency of Rabbi Prof. David Golinkin has refused to ordain openly gay students.

Sources said Elad-Appelbaum decided to step down after Golinkin "rejected openly gay students who applied for admission next year and wanted to investigate the sexual identities of those already enrolled at the seminary."

Amichai Lau-Lavie, an openly gay student at JTS and the scion of a renowned rabbinical family, sent an e-mail calling Elad-Appelbaum a "courageous and inspiring leader whose commitment to human dignity, tikkun olam and halachic progress is of international renown."

Lau-Lavie said her departure presents a "painful reality check" but that he was optimistic it would eventually bring change to the Conservative Movement's policy toward gays in Israel and in general. The rabbinical student said he considered applying for admission to Schechter in 1997 but was advised against it "because of my sexual orientation."

Other members of the movement on Thursday said the expected backlash over the resignation of Elad- Appelbaum – who they said was the third senior official to leave Schechter in as many years – may undermine Golinkin's position at the helm of the Masorti seminary in Jerusalem.

"The news may hurt the institute's image and its appeal in the eyes of students, who may not want to go there, as well as donors," a source said on condition of anonymity. "Golinkin will either give in or have to leave."

Golinkin on Thursday chose not to comment on Elad-Appelbaum's departure, saying "I have no response."
at December 08, 2011