Yes, An Orthodox Rabbi Can "Do" a Commitment Ceremony

Yes, An Orthodox Rabbi Can "Do" a Commitment Ceremony

Our colleague and teacher, Rabbi Steve Greenberg, is an Orthodox rabbi who will go down in history as being the first Orthodox rabbi to officiate a Jewish commitment ceremony and civil marriage for two men. In a recent article in The Jewish Week, Rabbi Greenberg explained that this ceremony which took place in Washington D.C. was not a "gay Orthodox wedding" as was sensationally reported. He wrote, "I officiated at a ceremony that celebrated the decision of two men to commit to each other in love and to do so in binding fashion before family and friends. Though it was a legal marriage according to the laws of the District of Columbia, as far as Orthodox Jewish law (halacha) is concerned, there was no kiddushin (Jewish wedding ceremony) performed."

Rabbi Reuven Spolter responded to Rabbi Greenberg's actions in a blog post "Why Has My Yeshiva Not Revoked Steven Greenberg's Semichah?" We write this as a response to Rabbi Spolter.

As two Conservative rabbis who were both ordained at the same rabbinical seminary, we also regard our semicha (rabbinical ordination) as a special honor whose legitimacy must be preserved. Like Rabbi Spolter and Rabbi Bernard Revel before him, we would hope that our rabbinical seminary would take back the semicha of a colleague who grossly violated either Torah law or civil law. However, Rabbi Spolter is mistaken in his characterization of Rabbi Steve Greenberg's writings and actions. 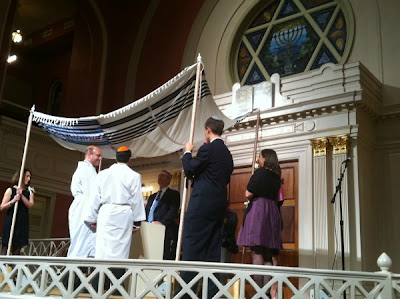 Rabbi Greenberg has neither violated Torah law or civil law. He has used his rabbinate to help right a wrong. In officiating at a same-sex commitment ceremony between two men, Rabbi Greenberg may not have acted in a way that fits Rabbi Spolter's belief structure, but he also did not violated any laws. The "to'eva" (abomination) in Leviticus speaks to a sexual act. No where does it discuss a life-cycle ceremony drawing upon the language of our sacred tradition to bless a relationship between two souls.

Rabbi Greenberg IS an Orthodox Rabbi in the sense that he received his semicha from RIETS. The way he uses his semicha is not "vulgar," as you put it. To the contrary. Standing under the chuppah (wedding canopy) with two men who have committed to spend their lives together, raise a family and grow old with each other in a loving way does not negate a person's ability to call himself an "Orthodox Rabbi." Yeshiva University or RIETS could certainly yank Rabbi Greenberg's semicha, but it wouldn't be for a violation of halacha. Rather, it would be for his violating a social norm that makes some Jews like Rabbi Spolter uncomfortable.

The role of Judaism has always been to raise the mundane to touch the sacred. God's world is full of opportunities for holiness. When two Jews find each other, and are prepared to enter into covenantal relationship, there is more than enough guidance that halacha provides to frame the moment. Furthermore, it is a responsibility we each carry as rabbis to stand with our People, person by person.

We hope that Rabbi Spolter and others will read these words from Rabbi Greenberg and try to understand why this Orthodox rabbi chose to courageously do what no other Orthodox rabbi before him had done:


Last December my partner and I returned from India with our newly born daughter. During the year of planning for her birth, I began to feel that I was failing as a rabbi to give young gay people hope in a religiously coherent future. As friends and students found spouses and decided to make families, it felt increasingly wrong to provide no context for commitment and celebration. Naming our daughter in an Orthodox synagogue and celebrating her birth there sealed my resolve.

While the condemnation of many is strong, I have received the quiet encouragement (if not always agreement) of a number of my Orthodox colleagues. While I do not expect other Orthodox rabbis to perform a ceremony of this sort any time soon, I do expect that we come to earn their understanding and respect as we take the frames of halacha seriously in the constructing of our committed relationships. In my view, the ceremony was beautiful, halachically informed and religiously meaningful, and I do hope that through consideration of it, the Orthodox community (and perhaps beyond) will come to recognize the human issues at stake.

We offer our congratulations to the two men whose relationship Rabbi Greenberg has helped to make sacred in our Tradition. We also offer our highest praise to Rabbi Greenberg and pray that he will serve as a beacon of hope to those in the Orthodox gay community who never thought they could be in a committed, blessed partnership.