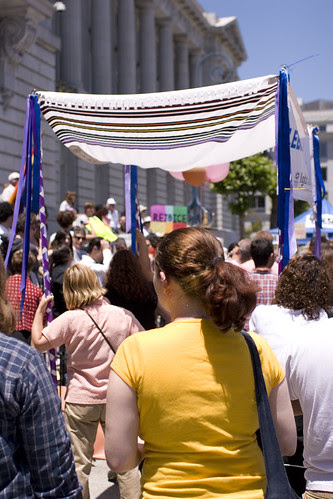 With the landmark New York marriage equality legislation of 2011 several million Jews now live within a state that allows same-sex marriages – and the Conservative Movement has noticed. Only five years ago the Committee on Jewish Laws and Standards (CJLS) – the central authority on halakhah (Jewish law) for the Rabbinical Assembly – issued competing responsa on the acceptance of lesbian, gay, bisexual and transgender (LGBT) clergy and the blessing of same-sex union; two retained the traditional prohibitions affirmed by the CJLS in 1992, while the third allowed for the ordination of LGBT rabbis and the officiating of commitment ceremonies – however, the ban on certain sexual practices was retained and no provision was given for the creation of a halakhic same-sex marriage ceremony. The latter responsum was adopted by the vast majority of Conservative rabbis and synagogues, as well as the Jewish Theological Seminary in New York and the American Jewish University in Los Angeles. And now that same-sex marriage has started the slow process of state-by-state legalization – and has become common practice in the nation's third most populous state – the three authors of the liberalizing responsum felt that it was time to begin crafting a standard halakhic same-sex marriage ceremony for the Conservative Movement. This past November, the three rabbis – Elliot Dorff, professor of theology at the American Jewish University; Daniel Nevins, Dean of the Rabbinical School at the Jewish Theological Seminary; and Avram Reisner, head rabbi of Congregation Chevrei Tzedek in Baltimore – submitted a proposal for same-sex marriage and divorce rites to the CJLS.

According to an article published by the Jewish Daily Forward, their proposal has been met with mixed reviews. The initial document was modeled on the traditional ceremony between a man and a woman – occurring under a chupah, with the recitation of the seven blessings and the exchange of rings. Reisner explained that the rabbis did not want to offer same-sex couples a ceremony that was "separate and unequal." However some members of the CJLS were not of like mind. "Some in the committee felt very warmly for a ceremony that was very close to a traditional wedding," he said to the Forward. "For other people it was desirable to step away from that model altogether. There was a determination that the tenets of a traditional marriage didn't apply." Reisner may be surprised to learn that there are some in the LGBT community who agree; Jay Michaelson, the founding director of the LGBT Jewish organization Nehirim, explained that while their proposal may appeal to some LGBT couples, others are not so keen on the traditional language. One problem are the kiddushin – the traditional marriage rites – which describe a hierarchical structure between husband and wife. "For feminist reasons I don't like the kiddushin anyway," Michaelson explained to the Forward. "And for LGBT reasons it didn't feel authentic to me to copy a model meant for a man and a woman to my situation." Michaelson has developed his own legally binging ceremony which focuses on vows, or nedarim.

At the recommendation of the CJLS, Dorff, Nevins, and Reisner are back at the drafting table; while their original proposal will still be up for debate, the three rabbis were tasked with creating a second, less-traditional template for a same-sex union. And perhaps having two options would be a positive development: one for LGBT individuals who want a traditional, halakhic ceremony and one for LGBT individuals who desire something more unique. "People invest time and energy into making a mark through their wedding ceremony that reflects their own take on their Jewish journey," explained Gregg Drinkwater, the deputy director of LGBT Jewish organization Keshet, in an interview with the Forward. "If you are using a one-size-fits-all ceremony, that is harder to do."

At the same time, a standardization of practice for the Conservative Movement may help solve other problems that LGBT couples face. An article posted on the Jewish-interest blog Jewschool points to the difficulty of finding an appropriate ketubah – or marriage contract – for same-sex couples; the ones available in Judaica shops use the traditional language of man and woman, and paying for a custom job can be expensive. With a standardized gender-neutral text for ketubot, they will likely become more available. And perhaps the development of a second, less-traditional template – with a greater emphasis on egalitarian language – is something that some heterosexual couples may desire. "People who want to innovate wedding rituals will still do that," Dan Ab writes. "A new standard text just shifts the starting point."

Steven Philp is a graduate student at the University of Chicago, studying for a Master of Divinity in Jewish Studies and a Master of Social Work. When not in the classroom he works for spiritual life, promoting dialogue and cooperation between different student-run faith-based organizations. Steven also volunteers with Mishkan, a progressive, spirited Jewish community in Chicago.  His column, Klal Yisrael, usually appears here on alternating Sundays.