Rabbi David Lerner on jewishboston.com: "A Shot Heard 'Round the Nation" #CLERGYAGAINSTBULLETS @PICOnetwork 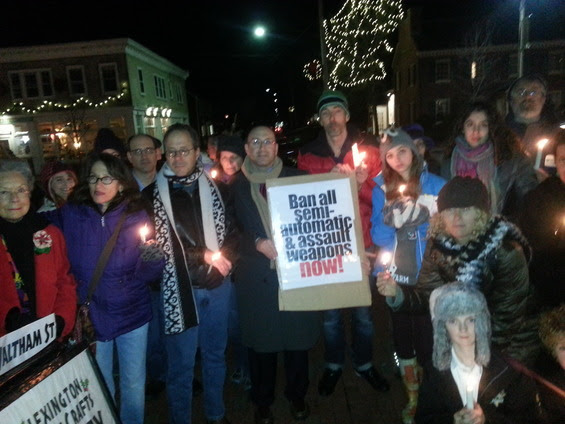 Last Friday morning, I was sitting in my study writing a sermon as I heard the unfolding nightmarish news about a school shooting in Newtown, CT.  Watching our preschoolers running around the playground, I was overwhelmed by sadness.  As a father, I thought of my own children.  Silent tears fell on my desk.

Why can we not protect the most vulnerable and the most valuable: our youngest children?

"Do not murder" calls out from the Ten Commandments.  That is because every life is precious, created in the divine image and therefore, of infinite value. Judaism frames it as: one who saves one life, saves an entire world and one who destroys one life, destroys an entire world.

The United States excels in many ways.  More than most Western democracies, it is country that is infused with religion and spirituality.  But, tragically, it is also distinguished by its widespread gun violence.

Even when compared to other countries, like Canada, where there are many guns, we, in the United States, use them more against each other with sprees of mass murder all too often polluting the land – Columbine, Virginia Tech, Tucson, Aurora, and now, most devastatingly, Newtown.

Some of the roots of this may lie in our revolutionary past.  Here in Lexington, we take particular pride in our historic role staving off the British Redcoats.

On April 19, 1775, the ragtag militiamen were ill supplied so they had to husband their bullets.

It was that motley band and what eventually became the American Revolutionary Army that defended this land against Britain, helping us attain our independence.  The significance of defending ourselves against outside invaders was enthroned in the in the Second Amendment to the Constitution, which gives us the right to bear arms.

In the succeeding centuries, much has changed in our world.  While there are still external threats, one of the greatest internal threats we face is Americans with guns and bullets.

Guns have become more and more prevalent in our society, and we have been afraid to challenge the status quo.

After the attack in Newtown, I went online and found that I could easily purchase the same .223 Bushmaster assault rifle that was used to murder children.

Sadly, in our great country, it's much harder to get help for mental illness than to buy semi-automatic weapons.

Guns do not kill people, but people with guns do.  The availability of guns and bullets makes it far too easy for people to kill.

Our religious traditions call us to act.

This is a moral and ethical issue that demands a religious response.  All clergy – men and women, Christians, Muslims, Hindus, Jews, Buddhists, Baha'is, Sikhs – have to publicly demand change.  We must come together as Americans moved by this tragedy to act and to rally for change.

People of faith across the country will do just that on Jan. 5-6, 2013 which has been designated a Sabbath to Stop Gun Violence.

There is no excuse for silencing the shots heard in Newtown.

Thankfully, President Obama spoke out forcefully, calling for action, but he needs to hear our voices as well.

Let us take a page from the Minutemen and husband our bullets by banning high capacity cartridges.  Let us reinstate the sensible assault rifle ban.  Let us close the loopholes so that all gun purchases require background checks.  Right now, 40% of gun sales have no checks!

In 1775, Lexington's "shot heard round the world" freed us from British tyranny; as horrific as the Newtown shots were, let those shots be heard as a call to free us the tyranny of gun violence.

Rabbi David Lerner is the spiritual leader of Temple Emunah in Lexington, MA, past president and treasurer of the Lexington Interfaith Clergy Association, is active in Faiths United Against Gun Violence and is the founder of www.ClergyAgainstBullets.org

JOIN THE GREATER LEXINGTON (AND BEYOND) INTERFAITH COMMUNITY FOR A "SERVICE OF REMEMBRANCE AND RESPONSE" on TUESDAY, JANUARY 1, 2013 at TEMPLE ISAIAH in LEXINGTON from 5-6 PM