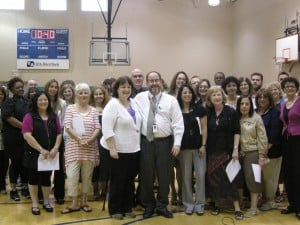 Gross Schechter headmaster Rabbi Jim Rogozen and his wife Marci join the staff at an assembly.

In that capacity, Rogozen said he will promote a new vision for Jewish education across all age groups "to connect and integrate all arms of the movement," including day schools, synagogues, camps and United Synagogue Youth. His aim includes "weaving all parts of the movement and helping to create a new vision," he explained.

"It's a wonderful opportunity," Rogozen said. "It's painting on a larger canvas." In total, there are about 1 million people belonging to Conservative synagogues, 600 Conservative Hebrew schools, 40 Schechter day schools, and tens of thousands of students in USY and youth groups. "It's a great opportunity to impact a larger group of people into a compelling, relevant part of the Jewish community that we call the passionate center. We'll be re-engaging, reinvigorating and having it become a more important movement in the world."

Rogozen pointed out that President Barack Obama had Conservative Jewish leaders at the White House last week. "Conservative Jews always held leadership positions in federations and national and international organizations," he said. "We need to reinvigorate that passionate center to continue to have a strong, powerful influence on the Jewish community. The Conservative movement has been one of the great innovative movements, and we need to continue to do that, responding to the needs of Jews in the 21st century as well as creating a vision for the future."

Rogozen, who has headed Schechter for 19 years, announced last month that he would be leaving the school in August for a job in New York City. Prior to coming to Cleveland, he was headmaster of a Jewish day school in California.

"It's bittersweet," he said. "My kids grew up here. We have many friends and colleagues we're going to miss. It's like leaving family." Rogozen will also be stepping down from his position as board chair of the Schechter day school network. He said he would probably commute to his job at USCJ in New York City from New Jersey.

With all-school assemblies recently held in his honor and a farewell celebration at the school planned at 7:30 p.m. Monday, August 20, Rogozen said he is reminded of special moments with the Schechter community. Some of these include Schechter's first kosher rib burn-off in 1993, the year he joined the school; eighth-grade trips to Israel that have continued annually since 1995, even after 9/11 in 2001, when many schools postponed foreign travel; and raising $7.2 million for the current school building. The school, which had 170 students when Rogozen came to Cleveland, now has 272.

"The toughest thing is to leave the people," said Rogozen, whose daughters Aviva and Nehama attended Gross Schechter through eighth grade and graduated from Hathaway Brown School in Shaker Heights. Nehama, a graduate of University of Maryland, is now in the Peace Corps, and Aviva is a senior majoring in Judaic studies and premed at Binghamton University in upstate New York. His wife Marci and daughters joined him for the assemblies in his honor.

The school's executive committee has recommended to the board of directors that a senior Schechter administrator serve as interim head of school for the 2012-13 academic year, school officials said. A national search for Rogozen's permanent replacement is planned.