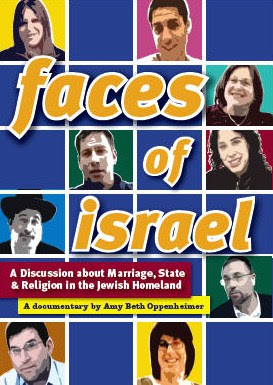 "Faces of Israel"- a must see/experience!

It was my great privilege last night to host and be a part of "Faces of Israel" (www.facesthemovie.com), an exciting new documentary film by director Amy Beth Oppenheimer.
The film is a discussion of Religion, Marriage, and the State, featuring an incredible array of voices and faces, including Rabbi Tamar Elad-Appelbaum (associate dean of the Schechter Rabbinical Assembly), Rabbi Hanan Alexander (Head of the International School at the University of Haifa), Chief Ashkenazi Rabbi Yona Metzger, Chief Sephardi Rabbi Shlomo Amar, regular Israelis, and many more.  There are chapters that examine the incredible work of the Masorti Movement, and of ITIM and Tzohar, all advocacy networks for a more responsive Judaism in Israel than the Chief Rabbinate has created in the first 63 years of Israel's existence.  The educational materials on the Faces of Israel website (www.facesthemovie.com) are well-developed, and participants have already asked for follow-up programming after last night. A good sign that this program successfully sparked emotional and spiritual and political chords.
Amy not only presented her work with clarity and passion, but also managed to nurture a non-judgmental conversation surrounding incredibly charged and important facets within Israel's and many Israelis' struggles for democracy, Judaism, meaning, and pluralism.  I cannot recommend Amy or the film (and both!) highly enough. Netivot Shalom's screening of the film was followed by a cross-denomination panel which Amy skillfully moderated, suggesting a model for focused, safe, and mutually respectful Israel-dialog.  Amy's direct email is director@facesthemovie.com - I encourage you to consider bringing Faces of Israel to community - you'll be very glad you did.
Kol Tuv,
Menachem
---
Rabbi Menachem Creditor
Congregation Netivot Shalom  || Bay Area Masorti ||  ShefaNetwork

No more destruction. No more hate. It's time to love each other.