Rabbi Aryeh Cohen: "On the Culture of Greed"

Rabbi Aryeh Cohen: "On the Culture of Greed" 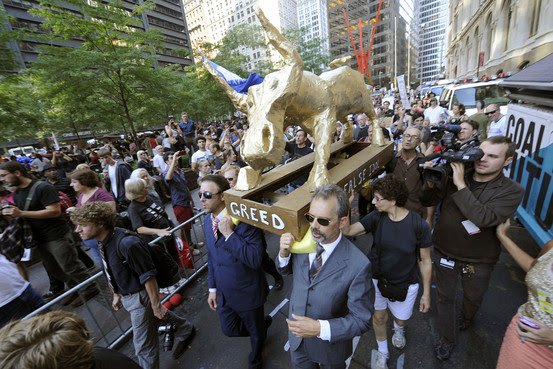 A few weeks ago, I was in a meeting discussing an upcoming ballot initiative which would eliminate the death penalty in favor of life imprisonment without the possibility of parole. Everybody in the room was opposed to the death penalty. The discussion was about the strategy that should be employed to convince voters to make the proposition law. The campaign's tactic was to argue that the death penalty was more expensive than life imprisonment without the possibility of parole (LWOP). This is, of course, true. As theLA Times reported:

[An] examination of state, federal and local expenditures for capital cases, conducted over three years by a senior federal judge and a law professor, estimated that the additional costs of capital trials, enhanced security on death row and legal representation for the condemned adds $184 million to the budget each year.

However, sitting in that room, engaging in that conversation, I suddenly got very depressed. I realized how we had all been impacted by the culture of greed that has overwhelmed our country.

I want to make clear that I think that we urgently need to stop our country's machinery of death and to begin the hard work of justice—reforming our prisons, making victims and/or their families whole, allowing for transgressors to repent and atone (as I argue here). I think that replacing the death penalty with LWOP is a good and important step on the way to accomplishing this. I was reacting to the fact that the parameters of the debate (cheaper is better) are not ones that I agree with and are destructive to the moral fabric of our country and society. Let me explain.

One does not expect to learn Biblical lessons from a politician. However, just a few weeks ago, in an interview with the Wall St. Journal, Herman Cain illustrated an important lesson that the Torah teaches. Cain didn't teach Torah. Rather he personified the type of person that the Torah warned against. (This is all before he demonstrated his latest moral and political obtuseness.) We find the following in Deuteronomy chapter 8:

Beware that you do not forget the LORD your God by not keeping His commandments and His ordinances and His statutes which I am commanding you today; otherwise, when you have eaten and are satisfied, and have built good houses and lived in them, and when your herds and your flocks multiply, and your silver and gold multiply, and all that you have multiplies, then your heart will become proud and you will forget the LORD your God who brought you out from the land of Egypt, out of the house of slavery. … and you say to yourselves, "My own power and the might of my own hand have won this wealth for me."

This narcissistic solipsism of the "winners" (or as Matt Taibi has pointed out, the cheaters) is not limited to one of the Republican candidates—it has taken over our culture in many ways. The most prominent arena in which this happens is the political. All arguments come down to their monetary value.

One of my constant companions nowadays is a rabbi who died over a hundred years ago. Simchah Zissel Ziv was born in Frankfurt, Germany in 1824 and eventually became the rabbi of the Lithuanian town of Kelme, as a result of which he is known as the the alter or "elder" of Kelm. He was the student of the founder of the mussar movement in Judaism. This movement stressed the importance of strict ethical behavior in the spirit of Jewish law. Reb Simchah Zissel put his own spin on this school. In the collection of his essays he stresses that the most important prerequisite to living a righteous life is "helping one's fellow with their burden." Reb Simchah doesn't mean this in a metaphorical way. A person has to train themselves towards a radical empathy in order to be able to feel and then to actually respond to the sufferings of another person.

The greatest obstacle to this radical empathy of "helping one's fellow with their burden" according to Ziv, is greed. Greed, he says, turns all actions and intentions on their head. One wants to give charity, but then, realizing that there is a monetary loss involved, one will invent all manner of justifications for not giving charity, up to and including making not giving charity an ideal ("moral hazard," "teaching people how to fish," "pulling up by bootstraps"). Not giving charity becomes in one's mind the more righteous path. Radical empathy is dependent on being able to respond to another person's suffering rather than calculating your actions vis a vis another in dollars and cents.

Wealth and greed are not the same. Greed is bad while wealth is neutral. The accumulation of wealth for the purpose of comfort and even luxury, if it is also accompanied by an investment in the well being of society—the assurance that all people reach a threshold of the goods needed to live in dignity— is good. The accumulation of wealth for its own sake—beyond any possible needs of survival then comfort then luxury—at some point turns into an obsession. The wealth becomes an end, a value independent of and overriding other values. In the Jewish tradition this is called idolatry.

The vocabulary of greed has taken over the political culture and has trampled empathy and the claims of justice. Cutting social service programs—which, a study released this week shows, have kept millions of people above the poverty line—in the name of "efficiencies" and "anti-tax pledges" is immoral. Raising the cry of narcissistic solipsism to the level of a moral virtue ("I earned this money all by myself and therefore nobody has any right to it!") makes the immoral claim of being an island unto oneself, as if one graded the land and poured the concrete and smoothed the blacktop with one's own hands to get one's widgets to the markets—as if one has not benefitted from luck and circumstance and the hard work of many who came before, and who toiled independent of one, as if the accident of birth, the economic and geographic circumstances of one who is impoverished are their own doing and their own fault.

The worse thing about this, the thing that had me depressed in that very nice living room with those fine people was that even those of us who are trying to create a more just world, have been impacted by the universe of monetized morals. Should we not be able to argue that the death penalty should be abolished because it is immoral on its own, and not because it is more expensive than the alternative!? Should we not be able to be heard on the issue merely because it is just and right?