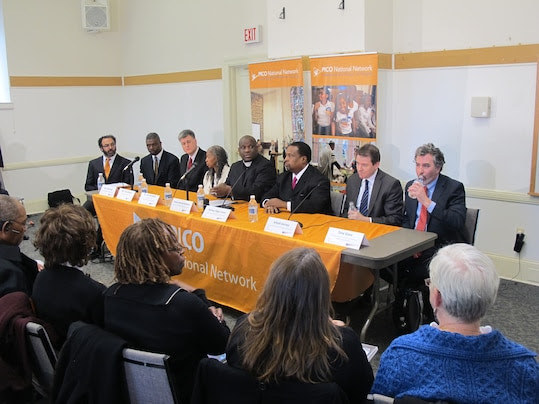 Hamil Harris/TWP - Religious leaders from across the country and spectrum of faith gathered on Capitol Hill for a new campaign aimed at guns in the streets. The event was sponsored by Lifelines to Healing, a faith-based network of community organizers that started in 1972.

http://www.washingtonpost.com/local/diverse-clergy-group-launches-effort-to-curb-urban-violence/2013/01/29/7a9c5056-6a53-11e2-ada3-d86a4806d5ee_story.html
A diverse national coalition of faith groups on Tuesday launched an initiative aimed at curbing the bloody tide of violence and gun-related deaths that has plagued cities across the country for decades.
“We have a moral imperative to heal our souls from this scourge of gun violence,” said Pastor Michael McBride, head of the Lifelines to Healing campaign, which comes under the umbrella of PICO, a national faith-based network of community organizations in 150 cities and 17 states.
0
Comments
Personal Post
Graphic 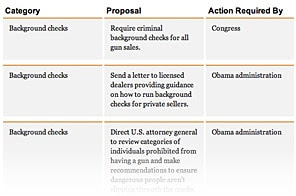 President Obama proposed expansive gun-control policies aimed at curbing gun violence. The Obama administration can implement about half of the proposals, but the others — arguably some of the more critical initiatives — will require congressional approval.
More from PostPolitics

Chris Cillizza 10:25 AM ET
THE FIX | Immigration remains a touchy subject among the GOP rank and file.

Rachel Weiner JAN 28
A super PAC supporting Hillary Clinton for president in 2016 was registered with the Federal Election Commission on Friday.

Why the assault weapons ban is (probably) dead on arrival

Aaron Blake 6:00 AM ET
THE FIX | Vice President Biden's words in recent days suggest the assault weapons ban
Read more
At a news conference at the United Methodist Building on Capitol Hill attended by about 80 leaders of various faiths and denominations, McBride said that the campaign would focus on lobbying the president and members of Congress in the coming months to go beyond gun-control measures and address the roots of urban violence.
According to the group’s Web site, such solutions could include programs to help those recently released from prison successfully re-enter their communities and find jobs, therapeutic programs to treat trauma caused by gun violence, and efforts to increase civic engagement and reduce violent crime.
In recent weeks, some white faith leaders lobbying Congress for gun-control measures after the Newtown, Conn., school massacre have expressed regret for being largely absent on the issue as gun deaths ravaged primarily black and impoverished urban communities.
Several of the pastors made reference to this lack of leadership in their remarks.
Troy Jackson, director of Ohio Prophetic Voices, said that it is time to move the discussion beyond the Second Amendment.
“Far too many white evangelicals have been indifferent when it comes to the suffering and pain in urban America. We need to repent!” said Jackson, whose clergy network focuses on issues of economic and social justice.
Rabbi Menachem Creditor of Congregation Netivot Shalom in Berkeley, Calif., read a joint statement that he said reflected what was in the hearts of many present.
“We are committed to uniting around the common pain and loss of those who have suffered in Newton and New Orleans, Chicago and Columbine and Oak Creek and Oakland,” Creditor said. “We are committed through our work to heal the soul of the nation.”
McBride added: “We believe in that our urban communities, Newtown happens every day.”
Bishop Edgar L. Vann II, pastor of Second Ebenezer Church in Detroit, said that for more than 20 years his home town has been known as the nation’s murder capital, and the causes go far beyond guns.
Detroit had 411 murders in 2012, Vann said. “To put that in perspective, in the city of New York, which has 8 million residents, they had 414 murders. We had 411 with only 720,000 people — that lets you know how dire it is,” he said.
The pastors said they plan to declare March 8, 9 and 10 “Gun Violence Peace Sabbath Weekend,” during which more than 1,000 congregations across the country will hold events that will include participation from local elected leaders.
Earlier in the day, the group received a briefing from the office of Vice President Biden on the progress of gun-control proposals. They also met with congressional lawmakers.
at January 29, 2013