Haaretz.com: "On 1st of Sivan, 5773, Women of the Wall became a legitimate stream of Judaism" 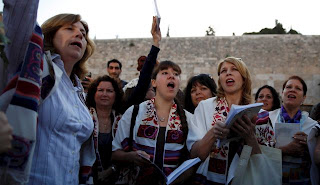 Haaretz.com: "On 1st of Sivan, 5773, Women of the Wall became a legitimate stream of Judaism"
Anat Hoffman, leader of Women of the Wall, warns of an 'earthquake' in the Jewish world if Bennett and Lapid try to turn the wheel back. But gaps between the parties are far and wide, and time is running out.
By Yair Ettinger | May.10, 2013
http://www.haaretz.com/jewish-world/jewish-world-news/on-1st-of-sivan-5773-women-of-the-wall-became-a-legitimate-stream-of-judaism.premium-1.523417

The Women of the Wall left the site feeling elated. Two human chains of policemen opened paths on the left and on the right, surrounded by an ocean of Haredi men and women. As they walked, the women, wrapped in prayer shawls, sang Ozi v'Zimrat Yah Vayahi li lishuah, a song marking the Sivan Rosh Hodesh (first day of the new month of Sivan) prayer.

Their smiles, like the smiles of those who have found salvation, did not diminish even when, beyond the chain of police officers, people yelled slogans like "go back to Germany" and other vile calls. Minutes later, a few stones slammed into the bus carrying the women away. This is how it ended this time. Until next month.

During Friday's Rosh Hodesh Sivan prayer at Western Wall, there was much more than Chillul Hashem (desecration of the name of God) and a desecration of the holy place – but besides this small  matter, both sides, the Haredim and Women of the Wall, earned points. The Haredi women leaders and the rabbi of the Western Wall, Shmuel Rabinowitz, flexed their muscles and created a deterrent for the next time. Minister for Religious Affairs Naftali Benett, Attorney General Yehuda Weinstein and the Ministry of Justice will surely not overlook this message when they sit down to formulate the new regulations for holy sites: The situation is untenable, they will say; the ruling by Jerusalem District Court Judge Moshe Sobel, that allowed the women's prayer in plaza, cannot be tolerated.

For the Women of the Wall, 1st of Sivan, 5773 is a holiday, a day in which they have been granted historic legitimacy. For the first time since the group's creation 24 years ago, they have been allowed to pray as they wish, with prayer shawls, with Tefillin, with song – and all in the holy site's main plaza. And all thanks to Judge Sobel.

This is not the first time the group has prayed as it wishes, but in the past the police had preferred to turn a blind eye to action deemed unlawful by the attorney general such as a woman wrapping herself in a prayer shawl (he was basing his case on the 2003 High Court ruling). Judge Sobel had a different interpretation, and thus not only did the police not arrest the women (what often happens after the prayer is over) – they guarded them from the moment they entered the main plaza and up until the festive event had ended. In front of a remnant of the Temple, facing dozens of cameras and microphones from Israel and the world, the Women of the Wall had become a legitimate stream of Judaism.

According to Anat Hoffman, leader of Women of the Wall, if Bennett and Lapid try to turn the wheel back – if they decide that wearing prayer shawls at the main Plaza is a felony – it would mean "an earthquake" in the Jewish world.

The beginning of the month of Sivan is also noteworthy for the Haredi public. At least 6,000 seminary girls crowded the plaza at the behest of rabbis, something Haredi politicians do not recall ever happening. Rabbi Aron Leib Steinman, the Lithuanian leader who had been extremely careful not to rally for public struggles (not even in the case of Haredi drafting to the IDF) decided to involve girls and women exactly in such a struggle. These women obeyed his instructions – to make do with a quiet prayer as their protest - in an exemplary fashion. But across from them, at the other side of the plaza, at least 2,000 Haredi men vocally protested against the Women of the Wall. Some of them cursed and threw garbage, chairs, paper cups and plastic bottles.

Compared to clashes between Haredim and Women of the Wall in the eighties, what transpired on Friday was relatively moderate. In the past, the chairs hurled at the women hit their targets. Today, the police can no longer treat the Women of the Wall as a group of eccentric women with kippot. These women have in the past two years won legitimacy they could only have dreamt of in the eighties, not least due to setting facts in the ground in spite of the court ruling against them.

The police controlled the flames until the event was over. The moment when control was lost occurred after the prayer, outside the Dung Gate, when a group of Haredim who were apparently waiting for their bus spit at them and cursed them. The police force accompanying the women to their buses could not salvage them.

Will the salvation, the solution to this blunder, come from Bennett? While the plan by Jewish Agency Chairman Natan Sharansky to build a third prayer section is considered a long-term solution, the minister for religious affairs has a deadline  which will expire in less than a month, in the beginning of the month of Tamuz. All sides, except for Women of the Wall, will try to change the regulations and prevent the women from praying "according to their custom" at the main plaza. The gaps between the parties are far and wide, and time is running out.