Ynet: "We are all Women of the Wall" 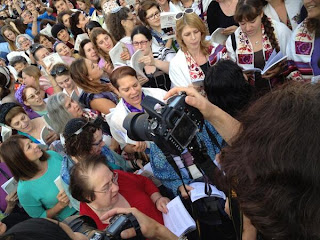 The clashes at the Western Wall's central plaza last Friday surrounding the Women of the Wall group's prayer service to mark the first day of the Jewish month of Sivan is an expression of the basic behavioral failure of the secular and traditional majority within the Jewish public.

The rabbis' decision to recruit thousands of girls from ultra-Orthodox seminaries in Jerusalem to disrupt the Women of the Wall's non-Orthodox services is scandalous in itself and should be examined by the Education Ministry – but this was not the main issue.

The haredi public displayed once again its ability to organize and fight for the principles it believes in. But these principles contradict the principles of most Israelis (including the principles of many moderate ultra-Orthodox), which should have come out in droves to protect, with their bodies, the Women of the Wall's freedom of worship.

The Western Wall and its central plaza do not belong to the haredi public. They belong to all of us, and we all have a right to express our faith at the site, while respecting the others' beliefs as well.

Those who witnessed the rage of the haredi protesters could have mistakenly thought they were fighting for something the Halacha deems crucial. But this is not the case. It is just another case in which the haredi public is testing the majority in the State of Israel. It is another one of those moments in which the democratic and moderate public in Israel must unite and say, "No more! We too have values we are willing to fight for." This should also be the approach when it comes to the exclusion of women from the public sphere.

The moderate public in Israel is facing an important test, and it must rally around the slogan "We are all Women of the Wall" and sacrifice ourselves for the freedom of worship – within the boundaries of the law.

On the first day of the Jewish month of Tammuz, which is fast approaching, democratic youth groups, along with Jewish revival organizations and secular, traditional and moderate religious Israelis must stand together as one at the Western Wall's plaza opposite the haredim and allow the women to pray.

Dr. Motti Shalem is the director of programs for senior educational staff at the Mandel Leadership Institute
at May 13, 2013