Jews and Gun Violence: An Update 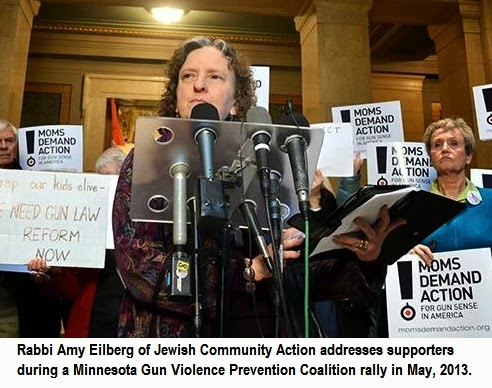 The 'best' update when trying to express the current Jewish response to American Gun Violence is this: Jews around the United States have had reignited (for lack of a better phrase) the prophetic aspect of their communal leadership. Rabbis are standing, walking, preaching, and lobbying with interfaith coalitions and political alliances to save lives from the scourge of gun violence.

A hint of the historic social contract between Jews and African-Americans is peeking through once again. We did not fulfill our obligation to stand with our sisters and brothers in Montgomery. The Jewish understanding that the immeasurable work of justice would not be completed in our days has, here and there, concentrated our concern inward, where the impact of our labors is perhaps more immediately recognizable. But Jews know that we dare not turn our windows into mirrors, misperceiving our own needs as all that matters. And, more to the point, that very phrase - "our needs" - has shifted subtly within Jewish organizing yet again. Gun Violence is not "their" problem. There is no "they." Bluntly: The problem is that many Jews in America have become so "white" over the decades that it has taken frequent massacres and multiple daily murders to call us back into the real world, where no person or group is immune to the blood spilled in our streets, where children have easy access to firearms, where the NRA has bought undue influence within our elected leadership, a world in which the social contract Jews must help resurrect is of basic necessity, a world in which "we" are "they," a world in which and every slain (and, please God, saved) child is our own.

It is as if Abraham Joshua Heschel's teaching, that there is "no time for neutrality", has become common sense, as rabbis and others have been shaken from a false sense of security with every shooting. Rabbis are reclaiming their roles as partners in the prophetic American impulse, amplifying the American value of communal obligation over the inadequate and isolating American philosophies self-reliance and rugged individualism.

So is there news? Yes. 33 Divine images are snuffed out every day in America, every day. 7 Newtowns a week, every week. And the Jewish community is committed to doing our part in restoring God's holy and battered image, one saved human life at a time.